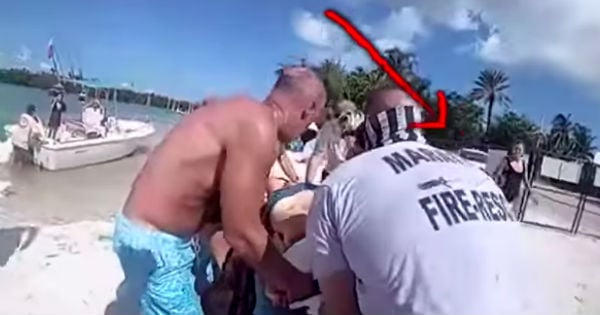 An 80-year-old hero acted when no one else would to save a man trapped inside a car sinking in water!

What would you do if you saw a car sinking in water? 80-year-old Steve Montelongo didn't think twice about it despite his age. He was taking his granddaughter home from the dentist when the unexpected happened.

They were stopped at a traffic light, much like any other day when his granddaughter exclaimed, "’Oh my god. A car just went into the canal, grandpa.'”

Steve pulled over immediately and ran to the edge of the water. There, he saw a man, alone in the car, and he was unable to get out. Steve said, “I see about 20 people gathered there. The guy’s still in the car.” So he said to himself, “I guess it’s up to me.” Then he jumped into the water.

“I literally yanked him out, just praying that T-shirt wouldn’t rip off right there, you know?” He said the driver was alert and conscious when he pulled him from that car.

Steve Is No Ordinary Man

But this isn't the first time Steve has been hailed a hero. In 2003, he received a Carnegie Missions Medal. The medal is a bronze medallion and is awarded to civilians who risk their lives to an extraordinary degree saving or attempting to save the lives of others. Steve was awarded this medal because he had saved two neighbors in their 80s from their burning home.

He said, “Heard the explosion, ran over to see what was going on. I thought it was my house. It was the neighbor's house,” he recalled. “Ran over there. My son was trying to get in the door. He couldn’t, so I said, ‘Move, let me try.'”

YOU MAY ALSO LIKE: Teen Working at Kroger Hears Senior Citizen Told to Put Groceries Back So He Pulls Out His Wallet

The man rescued at the canal is the third life he has saved. Although he’s being called a hero again, this 80-year-old said he’s no hero. He said he was just in the right place at the right time. It's men like Steve who remind us of how Jesus taught we ought to lay down our lives for another, friend or stranger for that matter.

Greater love has no one than this: to lay down one’s life for one’s friends. John 15:13