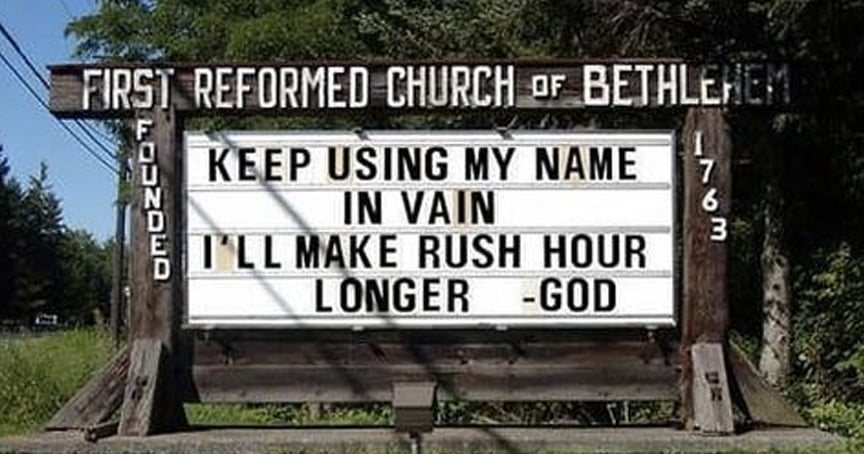 We’ve all had those embarrassing moments. . . like that time when I trailed toilet paper off my heel when I left the restroom, or when I left the house wearing a shirt that still had the price sticker on it. But imagine if you’re the poor soul who loses dentures and the whole world sees it happen!

It’s bad enough when we do something embarrassing. But nowadays, everybody has phones that record video, which means not only do the people in the room at the time know about the embarrassment but the WHOLE INTERNET KNOWS!

Fortunately, laughter is the best medicine. And I think these videos went viral for all the right reasons. These folks could have gotten upset about what happened to them. They could have become angry when people laughed at them. But they chose to laugh along with them or just go with the flow. And that’s a life lesson we could probably all use a little reminding of from time to time.

We hope these silly videos bring a smile to your face and brighten your day!

This 102-year-old grandma, Louise Bonito, got quite the birthday surprise when she blew out the candles on her cake. Louise accidentally spit out her dentures and the video of the mishap went viral after her granddaughter uploaded it to Instagram.

Grandma Polly Chester didn’t even realize what had happened, and her sky-diving instructor didn’t know what hit him. The 72-year-old grandma became an internet sensation after the force of the wind sucked her dentures right out of her mouth while she grinned broadly during her jump.

"When I closed my mouth, I realized they were gone," Polly said.

Apparently, the dentures flew out and conked her instructor right in the head, but luckily, he was not injured and they landed on the ground after their jump safely.

The 72-year-old grandma said she was happy to knock skydiving off her bucket list and that she was glad everyone enjoyed a little laugh.
"Everybody had a lot of fun over it and so did I," she said. Even if that fun came with a pretty high price tag. Replacing the dentures cost more than the jump itself!

Don Briggs is a proud 88-year-old grandfather whose grandkids call him ‘Poppy.’ One day, Poppy was playing a popular board game, Speak Out, with his grandchildren when something hilarious happened. If you’re not familiar with the game, Speak Out encourages people to try to say different phrases while wearing a mouthpiece.

Poppy’s granddaughter, Amy Metcalf Taylor explained, “He was saying his card, and we all saw his teeth starting to come loose”.

The game Speak Out had made Poppy’s teeth fall right out!

“We all started screaming. He made a face at my daughter, and out they came on the floor,” Taylor said.

Who has ever seen Price is Right Gameshow Host Drew Carey laugh so hard before? In this unaired blooper clip, the Showcase winner’s false tooth popped out of her mouth, flew across the floor and rolled around on the stage. Then the excited woman chased it down, picked it up, plopped it back in her mouth and just kept on celebrating!

And that wasn’t the only time contestants lost their teeth on the show! Check out this clip of a man sitting in the audience when his teeth flew out of his mouth!

5. Mom’s Dentures Fall Out During Game

This poor mom was also playing the funny board game, Speak Out, that requires the player to try to say phrases while her mouth is stretched open. Just as this mom was about to speak, her dentures fell right out of her mouth!

Her family couldn’t stop laughing, and they had to stop filming and end the game to try to regain their composure!

This bride and groom were drinking from the wedding cup at the altar during their ceremony when the unexpected happened!

RELATED: Uninvited Guest Shows Up At Wedding, Then Goes Home with Bride & Groom

The bride took a sip from the cup and passed it to the groom. But before he could share a sip, his bride reached over and plucked something out of the cup. Apparently, she wore a partial plate, and it had fallen into the cup while she drank!

7. Woman’s Teeth Fall Out On The Witness Stand of Televised Court Program

While this woman was pleaded her case against her husband, she got very animated. As she spoke, her dentures fell right out!

She grabbed them and put them back in without ever missing a beat from making her point to the judge!

The same thing happened to this reporter, who quickly tossed over to the news anchor while he tried to put the tooth back in. He eventually confessed the mishap to the viewers, explaining that a tooth had popped free of his bridge and that he needed to head for a quick unplanned trip to the dentist!

Josh Broughton posted this funny moment last Christmas sharing that “This is definitely one of the highlights of my Christmas!” Watch and you’ll see why!

This Korean Minister was getting very passionate about his point when his dentures went flying!

10. Compilation of Some of The Funniest Denture Fails On the Internet

Finally, here’s a video that shares all kinds of folks from all walks of life who all share the same problem. . . that one moment in their life where their teeth didn’t stay in their mouth. . . and someone nearby caught the whole thing on camera! Enjoy!