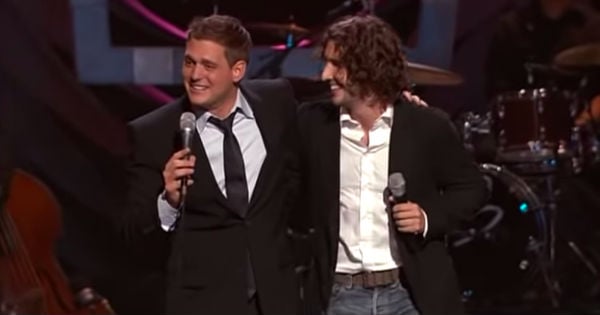 6 Olympic ice skaters in disguise showed up for a beginner’s class and blew everyone at the rink away once they revealed their secret.

This funny prank was put on by Good Morning America.

"We are doing a GMA Undercover. All week long we've been showing you how celebrities have been surprising their fans in very unexpected places and ways," says one of the hosts on the morning show. "And this morning we have an Olympic-sized surprise for you!"

The undercover agents that GMA got for this segment were six Olympic ice skaters. They included Kristi Yamaguchi, Brian Boitano, Kimmie Meissner, Todd Eldredge, and John and Sinead Kerr.

The mission for these talented athletes in this video is simple enough. They put on a disguise and join a group lesson. And it’s up to them to convince a rink full of skaters that this is their first time ever on the ice.

The Olympic ice skaters first show up at the Winter Village at Bryant Park in their disguises and try hard to look uncomfortable and unsure on the ice. But this must be harder for them than it sounds. With decades of experience skating, it must be so natural to them when they are out on the ice!

The surprise reveal happened when the ice was cleared to be cleaned by the Zamboni machine. Then all the Olympic figure skaters came out to show off their beautiful moves!

YOU MAY ALSO LIKE: Figure Skater Katia Gordeeva Pays Tribute To Late Husband Sergei Grinkov And It's So Moving

The rest of the skaters around the rink were in shock! They were taking out their cameras to document what was going on and to get a snapshot of the Olympic skaters in action. What a fun surprise!