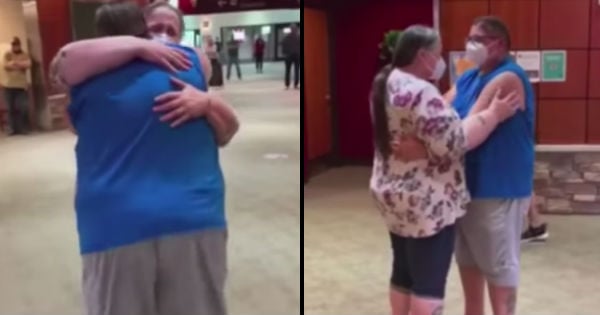 When a 9-year-old boy was in the car on the way to baseball practice and saw a one-armed man selling flowers on the side of the street, he knew he wanted to help him in some way.

Israel Parra is 57 years old and spends each day trying to make a living by selling flowers along the street in his California neighborhood. He lost his arm during an accident back in 1999 and had to change from selling ice cream to flowers because the ice cream cart was too heavy to maneuver with just one arm.

RELATED: These 5 Mister Rogers Quotes Are Just What We All Need To Hear During Troubling Times

One day, a 9-year-old named Jeremiah Reyes was in the car with his big sister when he spotted Israel on the side of the road, struggling with his flowers. It was extremely hot outside, and Jeremiah felt a calling to help out Israel, even though he was a stranger to him.

Jeremiah decided to set up a GoFundMe account to help Israel get by. Israel was stunned to hear that this young boy would do that for him. Right now, Israel is struggling financially, and he also has no health insurance. He has been wanting to get a prosthetic arm, but he just cannot afford it. Jeremiah is hoping to help with that.

The GoFundMe account that Jeremiah started has so far raised over $20,000! He and his sister are pledging to use this money to help Israel out as well as other street vendors in their community.

"I want to inspire everybody out there to start helping the community," Jeremiah shares.

YOU MAY ALSO LIKE: 6-Year-Old Injured While Shielding His 4-Year-Old Sister So Captain America Sent Heartfelt Message

What a thoughtful, young man. May we all aspire to be like him and look out for the people that are in need around us!

Hi I'm Jerry and I want to say THANK YOU for all your support. This makes me so happy. Let's be a light in this world. Thank you 😊