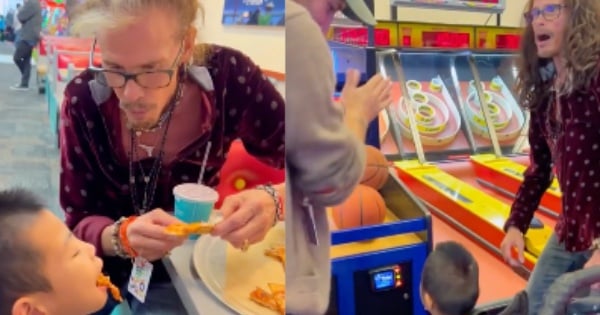 One photo of a police officer comforting a little girl after a car crash has gone viral online and shows just how important compassion is in their line of work.

RELATED: Grandma Passed Out At The Wheel So Good Samaritans Jumped Into Action

Officers with the Norfolk Police Department in Virginia responded to a crash where a woman had a seizure that caused her to hit a tree. While the first responders at the scene were providing medical treatment to the woman injured in the crash, Officer Jordan Marksbury had her attention elsewhere.

She made it her job to comfort the woman's young daughter until the rest of her family could arrive to take her home. And the sweet photo shows the little girl wrapped in a police jacket with Officer Jordan Marksbury's arm around her. I'm sure the young girl really appreciated the kindness and comfort that Officer Marksbury provided her during such a scary time.

The photo of the moment between the two of them actually won a photo contest. Every month, the Community Oriented Policing Services (COPS) division of the Department of Justice has a “Community Policing in Action” photo contest, and this photo was the winner for May 2022.

“The scene in the winning photo is nothing out of the ordinary for the NPD, which focuses on supporting its community members in as many ways as it can,” the Norfolk Police Department said in a press release. “The kindness and compassion of Officer Marksbury will be a moment this young girl will never forget.”

YOU MAY ALSO LIKE: Bus Driver Spotted Smoke Then Rushed To Get 40 Kids To Safety After School Bus Caught Fire

God bless officers like Officer Marksbury who go above and beyond the call of duty and show kindness and compassion in every part of their job.

Last night, officers responded to a crash where a woman had a seizure that caused her to hit a tree. While @norfolkfireresc was providing medical treatment to the woman, Officer Marksbury comforted a young girl until her family arrived to take her home. pic.twitter.com/opPNXSH3sk