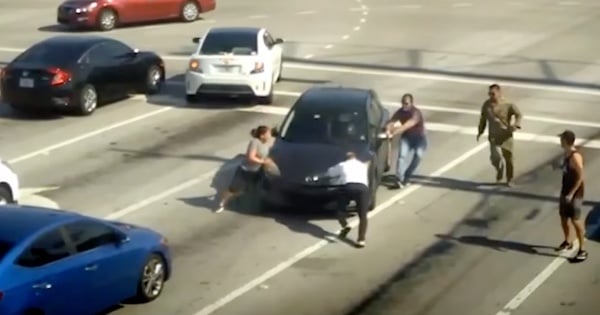 A school bus caught fire in the middle of a bus route but there was an angel on board. When Janet O'Connell, a bus driver, spotted smoke, she then rushed to get forty kids to safety after a school bus caught on fire.

The principal at the school where Janet works calls her a hero because she goes above and beyond anytime a student is in need. During one of her routine routes, Janet acted no differently. About ten minutes into the route, she noticed smoke.

RELATED: Brake Failure Has Truck Barreling Straight For Stopped School Bus and Cameras Caught It All

She pulled over and saw that it was coming from the front of the bus. The bus had caught fire!

Wasting no time, she jumped into action to ensure all forty of her students from kindergarten to sixth grade made it off the bus and to safety. The first few moments of this scary situation were caught on camera. In the video, you can see smoke billowing out of the front of the bus before flames begin to devour the bus.

Had Janet not been so dedicated to her job and the safety of her students, she might not have noticed, and forty students would not have gone home that day. Even though she saved so many precious and innocent lives after the school bus caught fire, Janet doesn't want recognition or to be in the spotlight. She told the principal, "I did what I did because I love my kids."

But I think we can all agree with the principal; what she did was nothing short of heroic. It was incredible.

The principal also stated, “We are blessed that everyone is safe. This is due to the quick actions of our driver, Ms. Janet, and the students. We are proud that our students showed how they are leaders of great character as they assisted one another.”

Thank God for Janet's quick thinking and actions when this school bus caught fire. Even though she doesn't think she's a hero, there are forty kids and their parents who think she's an angel on earth.

YOU MAY ALSO LIKE: 2 Brothers Jumped Into Action After Their School Bus Driver Collapsed

"Have I not commanded you? Be strong and courageous. Do not be afraid; do not be discouraged, for the Lord your God will be with you wherever you go," Joshua 1:9