After his family evacuated during the raging California Camp Fire, Kevin McKay stayed behind. He felt he had a duty to get students to safety by responding to an emergency call from Ponderosa Elementary. Battling terrifying conditions compared to Armaggedeon, the heroic bus driver from Heaven delivered 22 kids to safety. And his heroic tale is truly inspiring!

When Kevin McKay received an emergency call from Ponderosa Elementary requesting help evacuating during the fast-moving Camp Fire, he knew he had to help. The parents who were able had already arrived to pick up their kids. But nearly two dozen children remained stranded with their undoubtedly terrified family members unable to make it to the school.

As 22 students and two teachers loaded the bus, Kevin prepared to do everything in his power to get them safely away from the raging inferno.

“We’re you scared?” one reporter asked following the five-hour trek through smoke, flames, and gridlocked traffic. 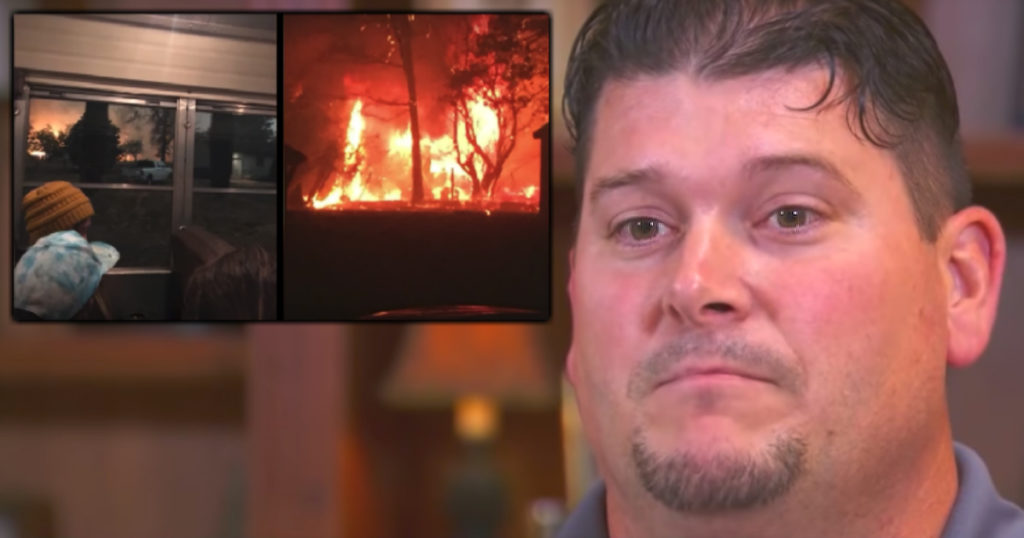 But the heroic bus driver did let fear stop him. And God saw him through his courageous task!

29-year-old kindergarten teacher Abbie Davis and 50-year-old second-grade teacher Mary Ludwig boarded the bus with the children as they headed into the menacing conditions.

“It was very scary. It felt like Armageddon,” Mary recalled.

Kevin urged the teachers to comfort and distract the kids. But it was impossible to miss the flames raging around them.

“When we started to leave the school, we saw one fire, then we saw more,” 7-year-old Wendy Reeves said.

The adults were just as terrified as the kids. But they refused to let it show.

“I held back from crying the entire time,” Abbie Davis recalled. “But we were so focused on those kids, and that great responsibility is what really kept us focused.”

Kevin navigated through the mess as best he could. But the roads were jam-packed with other vehicles fleeing the fire. And soon, smoke not only covered the road ahead but began filling the bus as well.

Again, Kevin knew he must do something. So, he ripped off his shirt. He and the teachers tore it into pieces. They used a water bottle to moisten each piece of cloth before handing it to each child so they could cover their nose and mouth.

“We were coughing and my eyes were hurting,” Kevin explained. “I knew we had to do something. And that was, you know, our best option with what we had.”

Traffic stood still. Smoke and fire raged all around them. At one point, another vehicle even sideswiped the bus.

Terrified, the teachers turned to the Almighty for protection over them and their students.

“We were both trying to keep each other from crying. And we just kind of held hands and... we just said a prayer,” second-grade teacher Mary Ludwig said.

At last, after five hours of torment, the bus arrived safely and the children reunited with their worried parents.

Kevin had already lost his home, which burned to the ground. But the quick-thinking bus driver won in so many other ways, with his family safely evacuated and his students out of harm’s way, too.

Kevin remained incredibly humble about his heroic act, praising the brave firefighters heading into the fire versus away from it. But the families of the 22 kids and two teachers he helped rescue won’t soon forget Kevin McKay’s courage. God certainly used him for a big job that day!

“We had the bus driver from heaven,” teacher Mary Ludwig said.