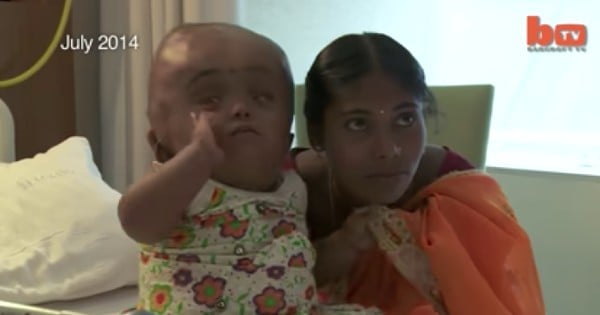 This 2-Year-Old’s Parents Couldn’t Afford Surgery. But Kind Strangers Stepped Up To Save Her Just In Time!
Read Article »

At just 2 feet, 6 inches tall, Rosemarie Siggins is the smallest mother in the world. She’s a true medical miracle and an inspiration for anyone who feels like life is a struggle.

Rose suffers from sacral agenesis and had the lower half of her body removed when she was just two years old. As a child, she found her prosthetic legs to be too painful and began using a skateboard to get around.

“My skateboard’s so important to me; it is the difference between feeling trapped and feeling free,” Rose said. “I couldn’t get by without it. And the kids think it’s cool!”

When Rose was a teenager, she worried she would never find love or be able to have a family, but that all changed when Rose, who worked as an auto mechanic, met Dave Siggins, who worked at the auto parts shop she frequently used.

The pair fell in love, got married, and amazingly conceived a child.

“When I went to see my specialist, they told me no one with sacral agenesis had ever gone full term and said a baby could crush my internal organs,” she explains.

“One doctor even advised an abortion, but I refused. I knew the chances of passing on my condition were almost nil.”

“Luckily, it was an easy pregnancy and Luke was born healthy by C-section in January 1999.”

She went on to have daughter Shelby when Luke was six, but her second pregnancy was more difficult.

“I had bleeding, breathing problems, and abdominal pains,” she said. “My body took a battering and, when I had my C-section, I also needed my appendix and gallbladder removed.”

Rose admits her health has worsened in the last few years, and she is unable to work at her job as a mechanic anymore.

She says she feels as though her hands and arms are literally wearing out and is worried she may be eventually be forced to use a wheelchair.

“I’ve got through all the challenges life has thrown at me, and I’m thankful I have two amazing kids and a loving husband. But I’ve finally realised I’m not Superwoman.”

“People stare at something they don’t understand. Because we’re different doesn’t mean we’re entirely different. We’re like you; we just come in different forms. I kinda like that way I am, I would never change it. I couldn’t imagine myself being, I guess what everybody calls normal cause this is my normal.”

Rosemary drives her kids to school every day in her specially adapted car and says she makes a point of talking to her children’s friends and students at their school about her condition to avoid them being teased about it.

She admits that most of the kids think she’s cool when they learn she travels around on a skateboard.

“Shelby loves that I’m so short because I’m always on her level. She says she loves having the world’s shortest mum!” she added.

“Once, I was hanging out with friends and we started talking about who has the coolest mum. I won because my mum rides a skateboard and works on cars. That beats baking cookies and cakes any day!”