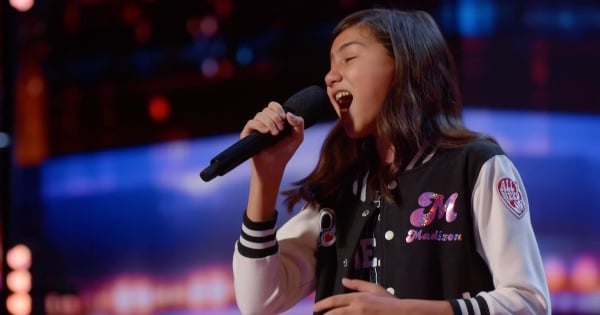 In this mind-bending audition, ‘Simon Cowell’ sings for the crowd thanks to some pretty impressive technology!

Tom from Australia and Chris from Belgium share that they started a company together and just met face to face two days ago after the pandemic. They bring out another guy named Daniel who sang in a previous season.

As they begin with a camera, Daniel is about to sing and Simon Cowell’s face appears on the screen. From the judges’ standpoint, the real Simon looks fearful and then all of the judges burst out into laughter.

As Daniel has Simon Cowell's face, he sings and the audience waves their hands and laughs. Simon smiles and laughs.

Simon makes jokes saying that the perfect contestant has been found. The judges tell the group that they did a fantastic job creating this. They say that talent makes them smile and laugh.

RELATED: Cristina Rae Was Living In Her Car While Pregnant & Now She's Blowing Simon Cowell Away On AGT

The judges give them yeses. These two men worked with their metaphysics to create an experience of humor and fun for the audience. They found a unique niche that has never been done before.

Creativity is a gift from God and we are all able to model our Creator in the ways that we create. Even if you do not consider yourself to be creative, the Lord has made you uniquely and through His power, we can be innovative to accomplish new things.

Whether it be something simple like cooking a new dish or something as complex as this performance, we all have something wonderful to offer.

YOU MAY ALSO LIKE: Simon Cowell Stops 12-Year-Old Ashley Marina Twice And She Comes Back with an Original Song

"For we are God's handiwork, created in Christ Jesus to do good works, which God prepared in advance for us to do." Ephesians 2:10