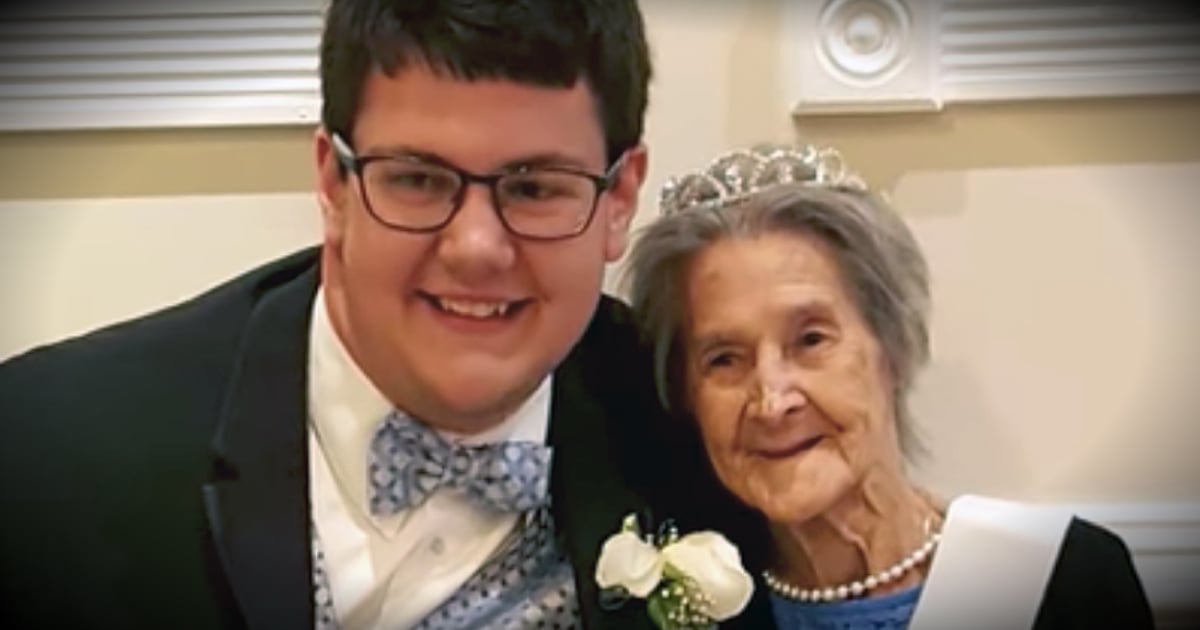 Grandson Finds Out Grandma Is Dying, Then Takes Her To Prom
Read Article »

When Tyson Crawley of New South Wales, Australia couldn’t pay his bill at the gas station, he expected fellow customers to get annoyed. Instead, a kind stranger paid the bill, then left a special note on the receipt! 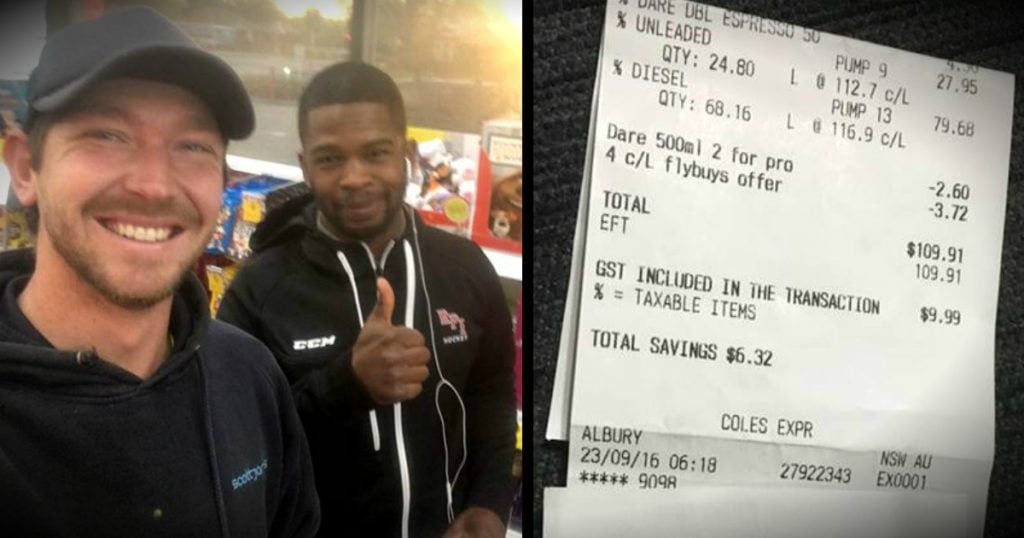 We’ve all been behind that person holding up the check out line. You know, the one that forgot their wallet or just can’t seem to get their card to work? Often the delay is met with eye rolls and annoyed sighs.

But that’s not what happened to Tyson Crawley.

He’d stopped off at the gas station to fill up his utility vehicle with diesel. When he went inside to pay, he grabbed a few coffees, too. But when he ran his credit card to pay tfor his purchases, he immediately realized he’d made a mistake.

You see, the night before, Tyson had transferred all of his money into a new bank account. He’d forgotten to put the new card into his wallet, nor could he remember the pin number for a card that had joint access with the new account.

With no cash in his wallet, Tyson had no way to pay.

RELATED: Cashier steps in when an elderly veteran’s card gets declined

That’s when a man from the back of the line offered him money. Tyson politely declined, explaining he just needed to try to remember his pin. But the kind stranger paid the bill anyways.

Tyson couldn’t believe a complete stranger would pay that much without expecting anything in return. Tyson insisted he pay the man back, prompting him to write his contact information on the receipt. He then asked to take a selfie with him.

“I was just incredibly overwhelmed,” Tyson said. “I couldn’t believe how beautiful and kind people could be.”

The two men then went their separate ways. But when Tyson opened up the receipt in his vehicle, expecting to see the Good Samaritan’s contact info, he found this note instead: 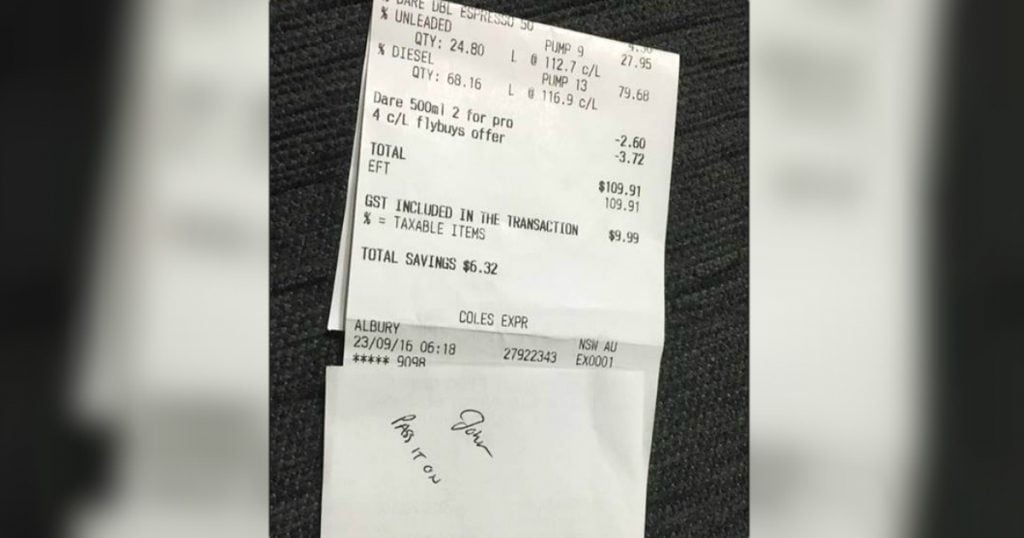 Since Tyson shared the encounter on Facebook, the kind stranger has been identified as John Kennedy Jr., a Michigan-born ice hockey player, who plays for the local hockey team.

RELATED: Mom’s incredible act of kindness for a veteran at a gas station

On Facebook, several of John’s team members commented that they are not surprised” to hear about John’s actions. They say it fits perfectly with what they know of John’s “quality of character.”

As for Tyson, he’s still blown away by John’s kindness. And he’s decided to take his advice on paying it forward.

“I decided I was going to start my journey in the same sense, so I went back to the same service station and I just walked in and asked to pay for a man’s fuel,” he said. “On the back of the receipt, I wrote, ‘Tyson - pass it on,’ the same way John did.”

Tyson shared the story in the hopes it would inspire more random acts of kindness. And we certainly hope for the same!

“But love your enemies, and do good, and lend, expecting nothing in return; and your reward will be great, and you will be sons of the Most High” Luke 6:35

YOU MAY ALSO LIKE: Angels at a gas station help a struggling man and his family 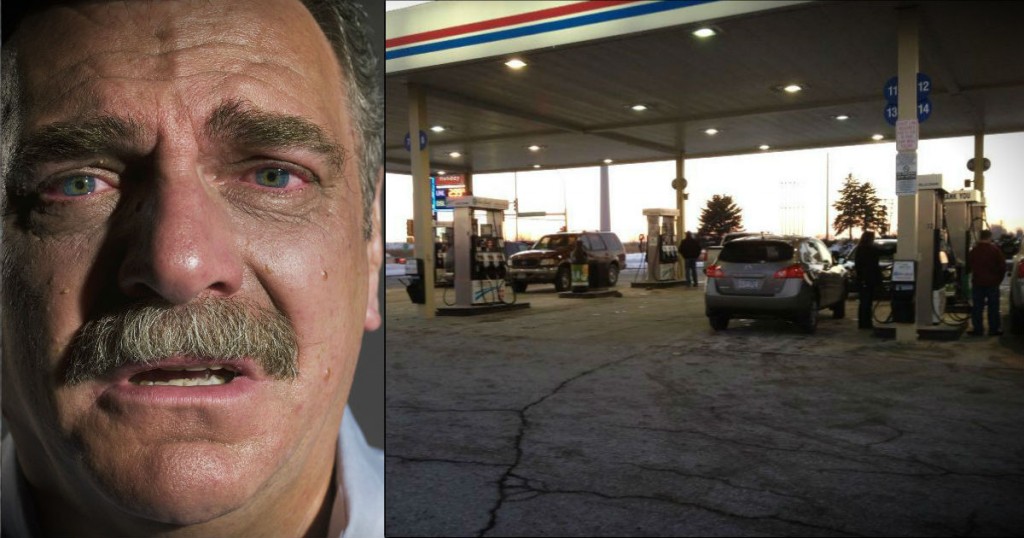