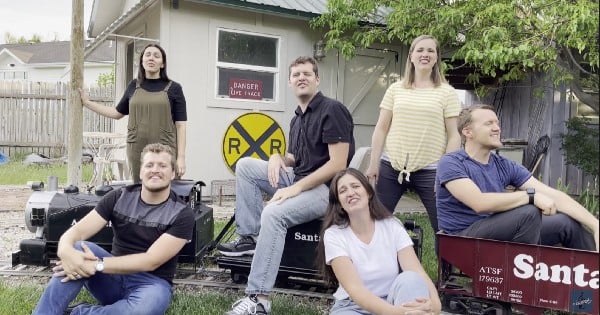 With The End Of Pandemic In Sight, Talented Family Celebrates With Song From A Musical
Read Article »

When Waffle House employees in Center Point, Alabama, learned Timothy Harrison was skipping his high school graduation, they immediately jumped into action. And their inspiring show of support makes this positive news story a must-read!

Timothy Harrison had been working alongside the Waffle House employees in Center Point, Alabama, for about a month when the incident occurred.

RELATED: Student Denied Entry at His Own Graduation for Wearing the Wrong Shoes, Then Teacher Steps In

Times were tough for the high school senior. He also didn’t have a ride to the ceremony. So the 18-year-old decided he’d just show up for work instead, prioritizing a shift at Waffle House over his own high school graduation.

Life can knock us down sometimes. And to see it already happening so early in life for Timothy is heartbreaking. This young man clearly needed something good to happen in his life. And God used a group of Waffle House employees to do just that!

When Timothy showed up at work, his fellow Waffle House employees were baffled.

“I thought you were supposed to graduate today?” Shantana Blevins pointed out.

But Timothy Harrison’s coworkers weren’t about to let this young man miss out on one of the biggest days in his life! They dropped everything and raced to get him to where he was meant to be.

The first thing the Waffle House employees did was help Timothy dress for the event. They hurried out and bought him a shirt, tie, and nice pair of dress pants. Next, they rushed to the high school to grab his cap and gown.

RELATED: College Student Sobs At Graduation Because His Parents Are A No-Show

“When I put on the clothes, I don’t even know the words. It was the best feeling," the high school senior recalled.

Finally, Shantana had Timothy hop in her car and she drove him 20 miles across town, getting him to the high school graduation ceremony just in the nick of time!

“To see his face when he came out, that was priceless,” Shantana said.

Act Of Kindness Has A Huge Impact

The kind gesture from a group of Waffle House employees who barely knew him touched Timothy Harrison deeply. It restored his faith in humanity and reminded him why he should keep fighting, even when life gets hard.

“I had people want to see me succeed, so it kind made me excited,” he said.

And God continued to drive this lesson home!

After Timothy’s story went viral, he was surprised by another unexpected act of kindness. Lawson State Community College offered him a full scholarship, even covering books, so the young man could continue his education.

“To know that I have a path to go somewhere? That’s something new,” Timothy said.

And what a beautiful reminder of just how far one act of kindness can go.

“You never know who you can touch or who you can influence with one simple gesture,” Shantana Blevins said.

YOU MAY ALSO LIKE: Cameras Rolled As Police Officer Realizes the Student He Pulled Over for Speeding Needs Help

“Don’t withhold good from those to whom it is due, when it is in the power of your hand to do it.” Proverbs 3:27

“Let each of you look not only to his own interests, but also to the interests of others.” Philippians 2:4

WATCH: Waffle House Employees Rally Together To Get Coworker To Graduation