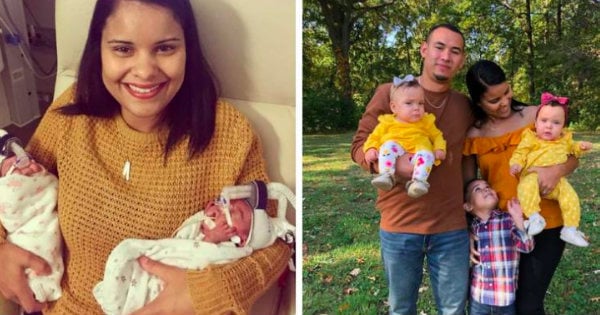 Angela Primachenko says she’s a walking miracle. That’s because the woman gave birth while in a coma as she fought the coronavirus. What an inspirational short story!

27-year-old Angela Primachenko tried taking every precaution during her pregnancy, which took place during the coronavirus pandemic. Yet, somehow, she managed to contract COVID-19.

Amazingly, the woman gave birth while in a coma. And Angela knows she owes her survival and the survival of her baby girl to God!

Angela lives in Washington — a state that received a lot of attention during the COVID-19 outbreak. As a respiratory therapist, she stopped going to work and took every precaution to keep herself and her unborn baby safe.

“She knew the risk,” her twin sister, Oksana Luiten, explained. “She took every precaution.”

However, Angela somehow managed to contract the coronavirus. Though, thankfully, her husband and 11-month-old daughter did not.

Her symptoms started with a cough, which led into a fever. As a pregnant woman, Angela wasn’t taking any chances. She sought medical attention right away and tested positive for COVID-19. Her condition got worse rapidly and she was soon in ICU hooked up to a ventilator.

“When you’re that sick, you’re just fighting for your life,” Angela said. “My focus wasn’t on fear; it was just on getting through it.”

Woman Gave Birth While In Coma

By the end of March and at 34-weeks pregnant, doctors put Angela into a medically induced coma. And during that time, they decided it would be safest if the woman gave birth while in a coma.

“She isn't doing well,” Angela’s twin sister, Oksana wrote on Instagram. “But we as her family are fixing our gaze on Jesus the miracle worker. We ask for prayer as prayer is powerful🙏🏻🙏🏻 we ask we unite as a community and pray for a miraculous healing.”

With her husband’s permission, doctors opted to induce labor while Angela was still in her coma. The doctors felt this would give the mom’s lungs more space and her body more nutrients.

On April 1 and in the midst of fighting the coronavirus, this amazing woman gave birth to a healthy baby girl. Angela’s husband called the little girl Ava because he knew her mom liked the name. Later, they learned the name actually means “breath of life.”

Thankfully, Angela’s husband, David, and 11-month-old daughter, Emily, tested negative for COVID-19. So, they were able to welcome their newborn miracle baby.

With Baby Ava safe and sound, it was now time for God to heal Angela Primachenko!

The mom remained in a medically induced coma for 10 days. When she woke up, she immediately noticed she was no longer pregnant.

“That was emotionally unbelievable,” Angela said. “It was just crazy to have to try to understand what happened the last 10 days, having to puzzle back together your life.”

At first, her condition only got worse. A few days after the woman gave birth while in a coma, her family feared the worst.

“We were actually scared we were going to lose our sister that day,” Oksana recalled.

But God wasn’t done! The next day, Angela’s health took a miraculous turn for the better. Doctors removed her ventilator and even moved Angela out of ICU!

Medical staff marked the momentous occasion by lining the halls, clapping and cheering during the move.

WATCH: Hospital Staff Cheers Mom As She Moves Out Of ICU

HUGE DAY TODAY!!!! #praisethelord Still currently at the hospital, in isolation but today I graduated from the ICU to the floor'!!!' 🙌🏼🙌🏼🙌🏼🙌🏼🙌🏼🙌🏼🙌🏼. Correction sadly I still can't have any visitors because I still I am corona positive #coronasurvivor

As Angela recovered, she couldn’t see her baby girl. But while the isolation was hard, it was also a great motivation to get well.

After 17 days in the hospital and two negative COVID-19 tests, Angela Primachenko was finally well enough to leave.

“I believe because of the community and the people and everyone that believed in me,” she said. “God just did a miracle to have me and my baby be healthy through this.”

"I feel like I'm a miracle walking," she added later.

In addition to the blessing of her recovery, the mom who gave birth while in a coma also finally got to hold her baby girl!

A few days later, Baby Ava was home with her family and “living miracle” mom.

It’s a truly amazing story, which is why Angela wants to share her experience with the world. She hopes her true, inspirational story will encourage others.

YOU MAY ALSO LIKE: Mom Wakes Up From Coma After Hearing Her Baby Cry

"There's hope," she said. "That even in the hardest days and the hardest times that there's hope and you can rely on God and people and community. The amount of community and people that were praying for me is just unbelievable. I was blown away, and I'm so incredibly thankful."

“For with God nothing shall be impossible.” Luke 1:37