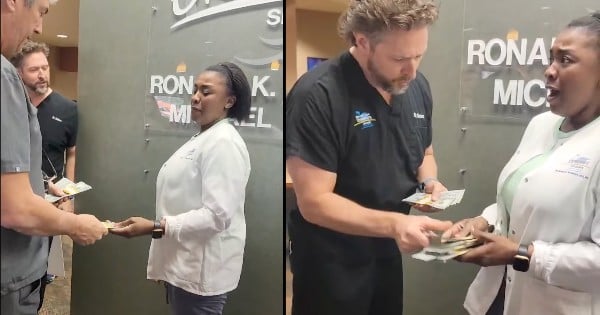 Rarely does an individual working for Sonic bring home a tip bigger than a couple of bucks. But an employee like John McLendon is rarer still! John is a carhop at the Athens, Texas Sonic restaurant. And, his excitement for his job, with or without big tips, is demonstrated daily!

At a time when many people are grumbling about poor service, and others are unhappy to be working in the service industry, John is a young man who appreciates his workplace and has caused his fast-food customers to value him.

John is friendly and fast, giving customers a Texas-sized smile and sprinting from one car to the next, literally delivering superior service! One customer caught John "in the act" digitally and shared a video highlighting his hustle on social media. The positive comments rolled in!

Cassie Woods came across the post and was also impressed by John. So, Cassie, an Athens resident herself, decided that perhaps all those commenting on John's performance might be willing to do a little something extra for the young man working at Sonic.

Customers Pull Together For Act Of Kindness

Cassie reached out to John's happy customers to collect a gift of appreciation for his hard work and kindness. Soon, Cassie had raised $320! Naturally, she presented it to John in the drive-thru!

RELATED: Man Eats A Hot Dog Meal At A Restaurant In New Hampshire And Leaves Staff In Awe With $16k Tip

John loves working for Sonic and isn't looking to go anywhere. But it seems likely he'll be moving up if he wishes. Surprised at the fuss, John said, "It's crazy. And then they’re telling me everybody was sharing it and like people wanted to send me money because I made their day. Just bringing happiness to the world at the Sonic here in Athens.”

It's tempting to complain when service is slow, sloppy, or unfriendly, but it may not be as natural to commend those doing a great job. Cassie took it upon herself to applaud someone for doing his very best, and the world certainly can use a little more of that!

YOU MAY ALSO LIKE: Shaquille O'Neal Shows Unthinkable Kindness to Family with 9 Kids, Plus Tips Struggling Waitress

"For the Lord takes delight in his people; he crowns the humble with victory." Psalms 149:4