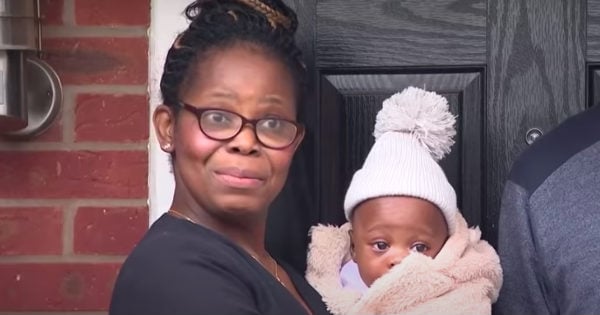 The 2020 Coca-Cola Christmas ad follows a dad willing to face any odds to fulfill his daughter’s Christmas wish. And when you finally see just what his daughter’s wish is, it brings tears to the eyes!

In business for decades, you can always count on Coca-Cola and their commercials for the holidays to bring a bit of cheer.

RELATED: The 2020 Amazon Christmas Ad Beautifully Sums Up Why We All Need Community, Especially Now

The 2020 Coca-Cola ad begins with a little girl hugging her father before he goes away for work. But before he left she handed him a letter for him to send to the North Pole.

The little girl's dad worked at an offshore wind energy plant. And as he ate his lunch, he notices the letter for Santa that his daughter had given to him.

In a last-minute effort to get the letter to the North Pole, the dad grabs a small speed boat to try to catch up with the mail boat that would deliver the mail across the ocean. But the dad's engine burned out mid-chase.

Now stranded at sea, he just sat and waited. While waiting in the middle of nowhere, a whale emerged from the water and splashed down. This caused the dad's boat to capsize.

RELATED: Disney Christmas Ad Hits Home With Reminder Of How Family Means Even More This Year

While underwater, he made sure to keep a tight grip on his daughter's letter to Santa, determined to deliver it no matter the cost.

The dad then woke up on a shoreline with the letter in hand. We then saw him sitting next to a fire holding and gazing at the letter. This is when the true adventure begins!

The dad was so determined to deliver this letter for his little one that he climbed cliffs, stumbled through swamps, and walked through the thickest parts of the jungle.

When he finally arrived at the North Pole in the 2020 Coca-Cola Christmas ad, a sign on the door had read "Closed for Christmas." Dropping to his knees, the father felt defeated until the beam from headlights illuminated the dad's face. A Coca-Cola semi-truck had pulled up, and the dad climbed in. It was a long journey but the driver transported him all the way back home.

When the dad got out of the truck, the driver handed him the letter he forgot in the cab of the truck. He took the letter and opened it, and it read "Dear Santa, Please Bring Daddy Home for Christmas."

When the father got the letter, he was determined to deliver it no matter what, yet all his daughter wanted was for him to be home for Christmas.

YOU MAY ALSO LIKE: Hardware Store Ad For Christmas Only Cost $130 To Make But Its Viral Impact Was Priceless

Coca-Cola has done it again with another amazing heart-tugging Christmas ad. Watch it and feel your heart swell.