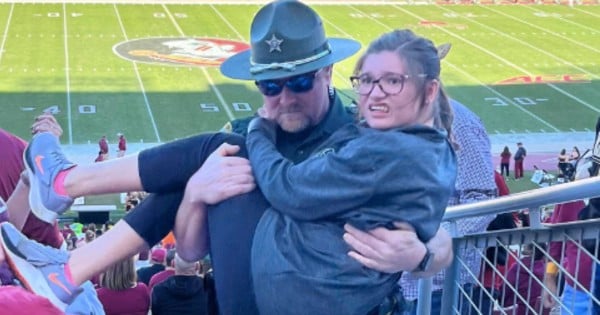 For their 75th anniversary celebration, West Virginia couple Lorraine and Ulysses Dawson got the white wedding they never had. And this time, they were surrounded by five generations worth of family!

When Lorraine and Ulysses Dawson said “I do” the first time, it was in 1946 and their ceremony was very different from the typical wedding. World War II had just ended and Lorraine donned a red suit while Ulysses wore his Army uniform.

RELATED: 97-Year-Old Didn't Have a Dress on Wedding Day So Hospice Nurses Fix That on 77th Anniversary

Of course, even without the traditional church wedding, the nuptials united two individuals who loved each other deeply. They went on to have 9 children together and their love only grew and matured through a beautiful marriage spanning 75 years.

So, when it came time for Ulysses’ and Lorraine’s 75th anniversary celebration, their family came up with the best way to commemorate their incredible love story!

Family Comes Together For Celebration Of 75th Anniversary

As the couple’s anniversary date approached, all it took was a comment from Lorraine to get the ball rolling on the celebratory ceremony.

“She said, ‘You know, I’ve never had a wedding,'” said the couple’s daughter Laverna Sharon Adkins.

The family decided a traditional church wedding would make for the best celebration for the 75th anniversary of Lorraine and Ulysses Dawson.

RELATED: After Spending More Than A Year Apart, This Couple Married 72 Years Is Finally Reunited

“That’s how it all came together. [It] was my mother’s wish and so everybody got together,” Laverna explained.

This time around, Lorraine wore a beautiful white gown. As a proud veteran, Ulysses stuck with a replica of the Army uniform he wore when he and Lorraine first met and married.

“That’s the way we met each other. He was in uniform,” Lorraine said.

With five generations of their family gathered for the 75th anniversary celebration, Lorraine and Ulysses Dawson said “I do” for the second time in the beautiful wedding ceremony they never got to enjoy in 1946.

“I thank God for him. I could never find a better one,” Lorraine said.

Even after 75 years, the deep love shared by these two was evident to all.

“All he could do was cry,” Rita Poling said of her dad, Ulysses. “He cried mainly through the whole thing.”

The celebration of a 75th wedding anniversary celebration is a true blessing, indeed. And no one knows this better than Lorraine and Ulysses Dawson.

“My prayers was answered and I thank God for it all,” Ulysses said of his incredible marriage and celebration.

YOU MAY ALSO LIKE: Couple Fell In Love During WWII, Then After 75 Years Of Marriage Die Hours Apart

And for those seeking advice on how to enjoy such a long and loving marriage, the couple was more than happy to share their secret.

“The main thing is God and putting Him first,” Ulysses explained.

“Whoever finds a wife finds a good thing, and obtains favor of the LORD.” Proverbs 18:22

WATCH: Couple Gets Wedding Of Their Dreams For 75th Anniversary Celebration