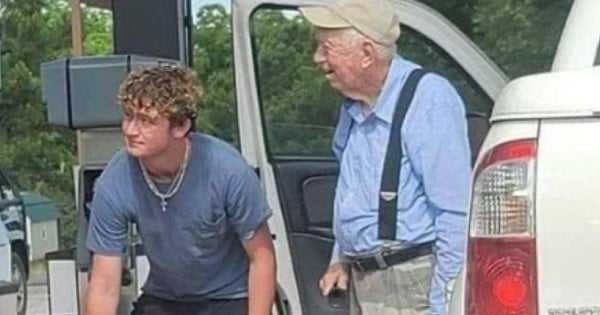 The Bible mentions a number of miracles in both the Old and New Testaments. Whether it is the parting of the Red Sea in Exodus, Daniel surviving in the lion’s den or Jesus walking on water in Matthew, the Bible is full of examples in which God intervened. However, one modern-day example of a miracle involved a man skiing in Utah in December.

The man, 35-year-old Travis Haussener, was backcountry skiing in the western state when things quickly took a bad turn.

RELATED: HIs Dad and Sister Were in Danger So This 7-Year-Old Hero Swam Over a Mile to Save Them

“All of a sudden this whole slope collapsed and there was just a wall of snow that was coming at me at, you know, 40, 50 miles an hour,” Travis said from a hospital bed.

Immediately after seeing the wall of snow heading his way, Travis understood that his life may very well be over.

“And then I thought, that was it. I thought, you know, my life was over,” Travis said.

Avalanche Leaves Man Buried in Snow Up To His Chest

The avalanche left Travis buried in snow that reached his chest. Understanding the serious nature of his situation, Travis began yelling for help as he started digging himself out of the snow with his one free arm.

Then a miracle occurred.

Tom Elbrecht, an off-duty firefighter, was skiing in the area and heard the cries for help. Initially, though, Tom questioned what he was hearing, believing Travis’ distressed calls as something else entirely.

“I started hearing what I thought was an animal, or potentially just two skiers talking to each other, Tom said.

Tom, though, shrugged off those thoughts and followed the sound where he found Travis buried in the snow. He quickly called 911 and assessed that Travis likely had suffered a broken femur. Tom, trying to keep Travis’ body temperature up, stripped down to a t-shirt and pants, giving his extra layers of clothes to Travis.

RELATED: God Leads a Furry Angel To A Bundle Of Blankets In A Park And Owner Hears a Baby’s Cry

Finally, after nearly 8 hours buried under the snow, first responders were able to free Travis. Tom stayed by Travis’ side throughout the entire ordeal.

If you thought being buried under snow for 8 hours would force Travis to give up skiing for good, think again.

“I’m super grateful for all the people that that, you know, got me out of there but, you know, I wouldn’t be me if I didn’t want to go out and ski again,” Travis said.

YOU MAY ALSO LIKE: 9 Babies Born At Once Are A Miraculous Surprise For Mom Only Expecting 7

“You are the God who does wonders. You have made your strength known among the peoples.” Psalms 77:14

WATCH: Man Rescued After Avalanche Leaves Him Buried In Snow

LISTEN: Bride In A Wheelchair Makes Groom’s Jaw Drop When She Walks Down The Aisle