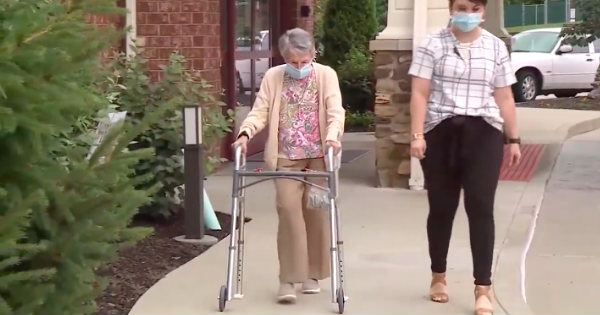 A wedding photographer just so happened to catch the harrowing Beirut blast on camera as he filmed a beautiful bride on her wedding day. And what a powerful reminder of how life can change in an instant!

Wedding photographer Mahmoud Nakib was filming a beautiful bride in Lebanon on her big day. But what started as one of the happiest days of her life soon took a terrifying turn.

The cause of the Beirut blast currently remains unknown. But Mahmoud’s video camera was rolling as the massive impact shook Saifi Village, which was close to the epicenter of the explosion.

The force of the Beirut blast pushes back the bride, who was smiling and posing just moments before. The shockwave also pushes Mahmoud Nakib down the street, but he keeps filming throughout. And it’s truly disquieting to witness the harrowing scene.

“First of all we heard an explosion but we thought it was far away, it was a small explosion,” Mahmoud recalled. “You can see in the video, it was a very, very, very big… You can’t describe the sound I heard, it was awful.”

The photographer thanks God that neither he nor anyone in the wedding party was seriously injured.

“Praise be to God who delivered us,” Mahmoud Nakib said on social media.

Sadly, though, at least 137 people lost their lives that day as a result of the Beirut blast and thousands more were injured.

Our hearts and prayers go out to all who have been affected by this tragedy. And the explosion is a stark reminder of why we are cautioned in the Book of James not to boast about tomorrow. We never know when things will change. So, let’s focus instead on making each day the best we can and give the rest over to God!

YOU MAY ALSO LIKE: Woman Burned In Gas Explosion As A Kid Now Uses Her True Story To Inspire Others

“How foolish it is to say, ‘Today or tomorrow we will go into this town, and be there for a year and do business there and get wealth.’ When you are not certain what will take place tomorrow. What is your life? It is a mist, which is seen for a little time and then is gone. But the right thing to say would be,’ If it is the Lord’s pleasure and if we are still living, we will do this and that’.” James 4: 13-15