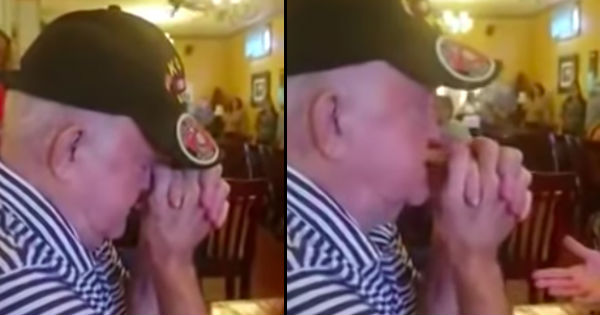 We all want the best moments of our lives to be forever framed, not just in our hearts but also on the walls of our home. Brittany Marshall did just that, spending four days keeping the ‘biggest secret' from her husband before sharing the good news.

Brittany Marshall of Frisco, Texas spent nights lying awake secretly plotting while her husband Kaleb slept soundly, unaware of what she was up to.

RELATED: Wife Tells Husband He's A Daddy-To-Be And He Has The Best Reaction

He had always wanted to be a dad, but Brittany wasn't ready for motherhood at first. She wanted to have a house and a career before she even thought about being a mom.

"Kaleb has always wanted to be a dad, he talked about kids while we were engaged, and for years after getting married. I wasn't ready, I wanted a career, a house, a plan," she said.

Brittany continued, saying, "I am not sure why all of that mattered so much to me. I already had the most important thing to begin a family, a man who loved me, and a man who without a doubt would be a great father."

So, when the couple began trying to have a baby, she began looking for a photographer to capture the moment she told him.

"I knew when we started trying to conceive I wanted to capture his face, just like that, when I told him we were pregnant – so our future child could forever have that memory too," she said.

Brittany soon learned she was pregnant. She then reached out to a photographer about capturing the moment when she would tell her husband about her secret.

"I wondered how I would get through the next few days keeping this secret from my husband. I must have taken ten pregnancy tests hoping the line would get darker. It did, and each day it became more real," she said. "I slept next to my husband for four nights harboring the biggest secret I have ever kept in my life."

The photographer arranged the big moment and Brittany hid one of her pregnancy tests in her bouquet. Kaleb didn't complain about being in a full suit despite the hot Texas temperatures.

"My heart was racing"

Midway through the shoot, Brittany finally revealed her secret. She told her husband innocently there is something in the bouquet for him.

"Confused, he slowly reached in and pulled out the test, and just stared. My heart was racing, and of course I shed a few tears which he calmly wiped away and finally said, ‘wow.'"

RELATED: Wife Is Having Triplets And Her Husband's Reaction Is The Best Thing I've Seen All Day

The look on his face was forever captured in a photograph just like his wedding day. It's a good thing Brittany had the moment photographed because she doesn't remember much.

"I don't remember the rest of the words he spoke, I just remember the look on his face. Just like our wedding day. You see, there are so many moments in life that stay with you forever. Some are devastating, and some are happy. We don't always get to pick those moments, they just happen. I chose to save this moment so our little girl will have a memory etched into her mind. She will forever know the joy on her father's face when he first learned he was going to be a dad," Brittany said.

How many fathers are as blessed as Kaleb?

YOU MAY ALSO LIKE: Bride Pulls Off An Incredible ‘First Look' Prank On Her Husband-To-Be

Like his daughter, he will have a way to remember the moment he learned he was going to be a father–one of God's greatest blessings.

This sweet couple will be welcoming their first baby into the world in just a few short months. I can't believe I haven't shared any of their session. Brittany held this wonderful secret in until their session! It was so amazing to be apart of the reveal! #theollieworld

A post shared by Dallas, TX Photographer (@jamiedenholmphotography) on Sep 20, 2018 at 4:40pm PDT