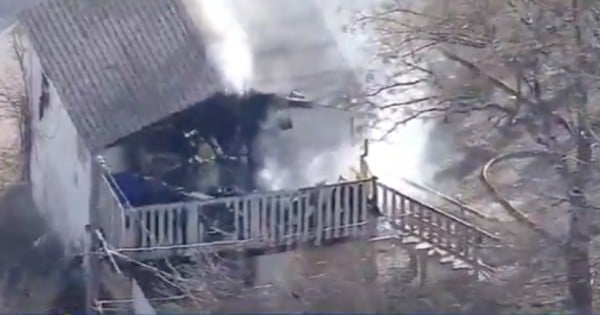 What would you do if a simple illness like a child's ear infection turned into a life-threatening moment for your little one? Roseanne Kirkpatrick was told her five-year-old daughter, Kacy wouldn’t survive the night after a doctor's visit for an ear infection.

Roseanne took her daughter Kacey to her family doctor for what seemed like just another ear infection. Her daughter was no stranger to ear infections. Roseanne just assumed her little girl needed a round of antibiotics.

RELATED: Boy's Life Changed in an Instant So Hospital Is Cheering for 2-Year-Old Walking Again

So, after a visit to the doctor, the pair went home to rest and fight the infection with lots of rest, love, and snuggles from mom. Over the next few days, Kacey didn't seem to be getting any better. Roseanne's concern grew and she knew something wasn't right.

She then decided her daughter needed more help and took her to the hospital. When they got checked in, doctors realized Kacey wasn't fighting an ear infection. . .she was fighting for her life.

Kacey was isolated from her mom until the test results came back negative for COVID. Roseanne said, “I was ringing Alder Hey [Children's Hospital] up to make sure she was okay and see if the results had come back and if I could come down. They said to be honest with you we don’t think she’s going to make it but the next 24-hours would be crucial," she said.

This call was every mother's nightmare. She didn't know her daughter was so sick until Kacey was diagnosed with Lemierre's disease, a severe illness caused by bacteria.

Child’s ‘Ear Infection’ Turns Out To Be Something More Deadly

But for Kacey, her illness was life-threatening because it wasn't caught right away. The infection wreaked havoc on her body and she underwent several operations to remove the infection.

“I didn’t know if she was going to live or die, I just wanted to be by her side. I started blaming myself thinking I should have done more, but I did everything I could. If only I’d took her in a week earlier was going through my head," her mom said. But, thankfully, God's hand of protection was on Kacey.

Roseanne relied on her faith and held onto hope even after all of Kacey's ordeal. After her last surgery, her mom felt hope rising when her little girl seemed to be her bubbly self again. Thank God for miracles and for this little girl's life. She will have one amazing story that will show others how God brings things together for our good.

YOU MAY ALSO LIKE: New Mom's Skin Was So Toxic, She Couldn't Touch Her Own Baby

"Truly I tell you, if you have faith as small as a mustard seed, you can say to this mountain, ‘Move from here to there,' and it will move. Nothing will be impossible for you." Matthew 17:20