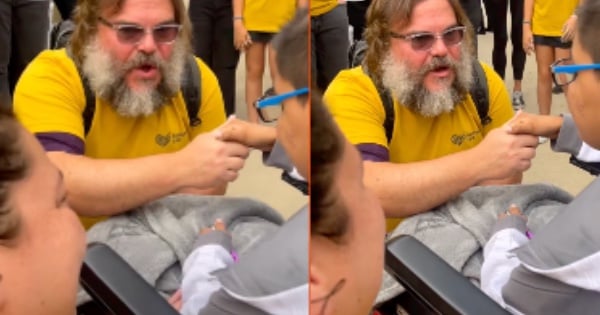 For Christina Applegate, illness wasn’t going to rob her of the joy of earning a star on the Hollywood Walk of Fame. And to accept the honor, the actress made her first public appearance since announcing her MS diagnosis. And when it came time for her to give her speech, things got pretty emotional!

Doctors diagnosed Christina Applegate with MS (Multiple Sclerosis) in 2021. This is an autoimmune disease where, for whatever reason, a person’s immune system begins attacking the central nervous system. The resulting damage can cause a host of neurological problems, such as pain, paralysis, vision problems, cognitive problems, and much more.

Christina received her diagnosis in the midst of filming for the third and final season of her Netflix show, Dead To Me.

“I got diagnosed while we were working, and I had to call everybody and be like, ‘I have multiple sclerosis’… And then it was about kind of learning - all of us learning - what I was going to capable of doing,” the actress recalled.

Hindsight being what it is, Christina now realizes she’d been experiencing the symptoms of MS for quite a while prior to her diagnosis. She had random numbness coming and going in her feet, balance issues, and fatigue, all of which she ignored.

“I didn't know what was happening to me,” she explained.

A few months after doctors diagnosed her with MS, Christina Applegate announced her illness on social media. In the announcement, she mentioned what a “strange” and “tough” journey it had been. But she was also grateful for all the support she’d received and seemed determined to keep persevering.

Christina refused to let Netflix pull the plug on the final season of Dead To Me. Instead, she powered through some really tough days in order to finish filming.

“They were gonna pull the plug, you know? Because it was like torture - and they felt like they were torturing me, too,” Christina recalled. “But I was like, ‘No, no, no, no, no, no: We have to finish this story.'”

A Star On The Hollywood Walk Of Fame

Upon the completion of filming, Christina Applegate shifted her focus to dealing with and learning about her illness. And this meant withdrawing from the limelight.

RELATED: Actress Christina Applegate Hears Of 2 Sisters In Dire Need, Then Champions To Save Their Lives

However, once the actress received word she’d earned a star on the Hollywood Walk of Fame, Christina Applegate refused to let illness keep her from attending the ceremony!

Christina showed up to the big day with a wheelchair and a cane. She was surrounded by several adoring costars: Katey Sagal and David Faustino from her time on the show Married with Children, Linda Cardellini from Dead To Me, and Selma Blair, a fellow sufferer of MS and costar from the 2002 film The Sweetest Thing.

The Walk of Fame ceremony marked Christina’s first public appearance since receiving her MS diagnosis. And Christina couldn’t help but get emotional as she took to the podium to give her speech (with assistance from her cane and costar Katy Sagal).

“This day means more to me than you can possibly imagine,” she said before thanking all of those who have supported her through her life.

YOU MAY ALSO LIKE: 3 Female Superstars Sing A 60's Mash-Up And It's Outta Sight

We certainly pray for Christina Applegate and all those impacted by this terrible illness.

WATCH: Christina Applegate Tears Up During Walk Of Fame Speech

LISTEN: Mark Wahlberg Moves Out Of California | Reba McEntire Refused To Let Her Son Into A ‘Spoiled Brat'