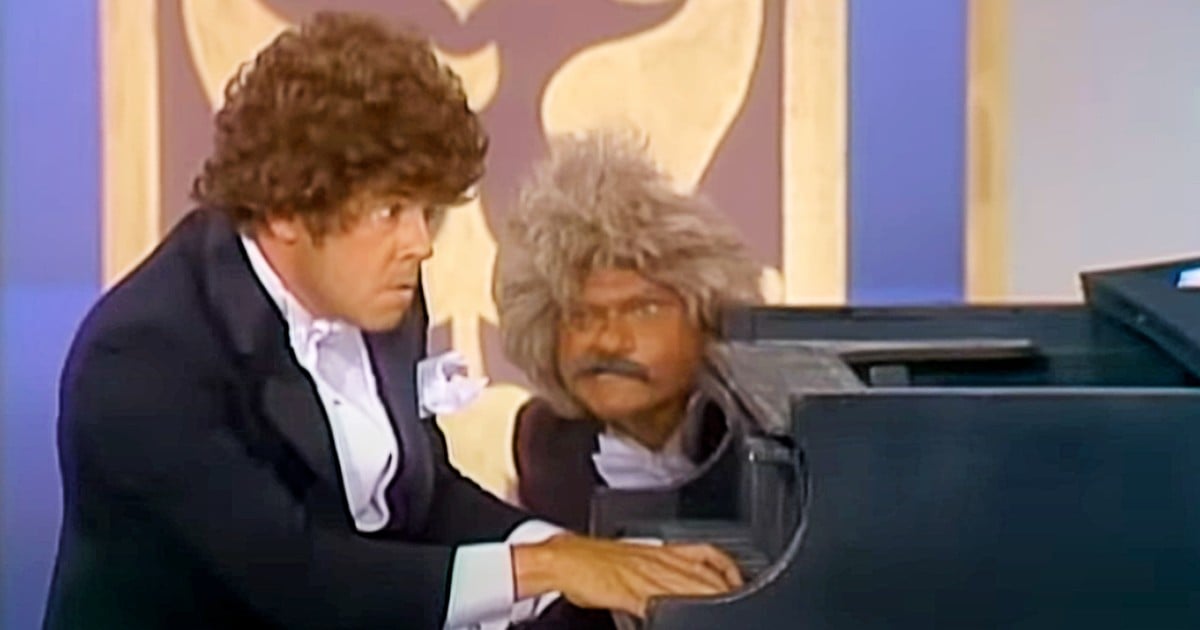 And here's proof that some of the best humor is based on real people and real situations we encounter!

The sketch opens with Vicki Lawrence playing a well-dressed and high-heeled homemaker of the era. She's busy dusting when the doorbell rings, and she opens it to find Tim Conway. Tim is playing Mr. Willard from the Davis Vacuum Cleaner Company in this vacuum salesman skit.

Mr. Willard makes a pretty dorky impression with high-water pants and his vacuum hose hanging heavily down his front. He gives Vicki a flashlight keychain, but his joke about its durability falls flat.

Even so, Vicki accepts the gift and welcomes him in so he can demonstrate the new Davis and its "interesting" attachments.

Mr. Willard surveys Vicki's home, seeming a little impressed by the place. He scurries around to find electricity and begins to show the Davis 500, holding up a box that looks very much like an old barbie doll case of the time, minus the pink. He struggles through a couple more awkward jokes. And, Vicki sits politely but appears a smidge uncomfortable with his sad sales routine.

Tim, as the vacuum salesman in this skit, begins to explain the virtues of the new Air Inflow Terminal and the workings of the Davis vacuum. Though he is supposed to be excited that this vacuum needs no filter, he seems to wilt during his spiel.

Within moments, he's nearly in tears and has lost any fragment of confidence he had when he started. Then, suddenly he's packing up, convinced that she's not going to buy what he's got!

A Lesson In Human Nature

Vicki gets up and rushes over to encourage this disheartened salesman. She says that she really might like to buy the Davis. She assures him that she'd like to see his demonstration, but now Tim claims she's just angling to get her house all cleaned at his expense. The next thing we see is Vicki asking Tim to sit and relax while she tries out the vacuum on her own.

The vacuum salesman in the skit then goes from dejected to downright rude. By the time Vicki has done her own demo, Tim has chastised her and thrown his own product catalog at her. This nice, naive woman eventually buys the Davis 500, and Mr. Willard is out the door leaving no change, no receipt, and taking an apology from her with him. She's become the "sucker" that the vacuum salesman claimed she was taking him for in the skit. It's crazy funny and just plain crazy!

The sketch has lots of vintage elements within it. The furnishings, the manner of dress, and the activity of door-to-door sales all harken to another time. But, we sure hope there are still "Vickis" in this world-nice, even if naive, people trying to help out others!

"Therefore, rid yourselves of all malice and all deceit, hypocrisy, envy, and slander of every kind." 1 Peter 2:1