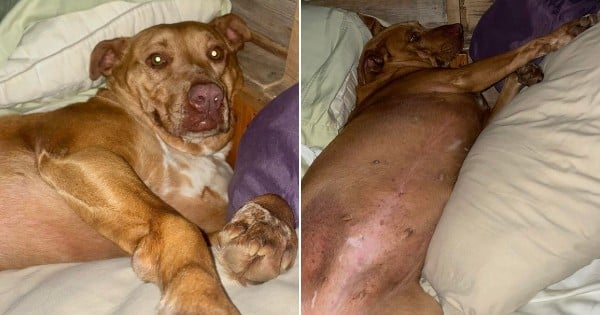 Couple Wakes Up To Find Dog In Bed With Them, Only It’s Not Their Dog
Read Article »

A tiny dog's nose detected cancer. That's right! They say a dog's nose is a whole world in itself with all the tiny microscopic scents it can pick up at any one time. Once this dog picked up the scent, she was desperate to make her human mom understand. This dog's heartbreaking cry leaves the owner baffled until doctors discover a serious illness.

Sweet little Bella Boo is a Yorkshire Terrier who's been Karena Kirk-Drain's furry sidekick for the last eleven years. As all furry friends do, Bella Boo has a routine in the evenings where she lays comfortably on Karena's legs at bedtime.

But one evening, Bella Boo wouldn't settle down no matter what Karena did. Instead, Bella Boo kept trying to lay on Karena's chest and eventually began crying.

“She started laying there and crying, and it was a heart-breaking cry,” Karena said. “It was soul-destroying hearing her like that.”

No matter what Karena did, Bella Boo refused to settle down.

"Bella always slept on the back of my legs, but she kept lying on my chest. Every time I took her off me, she'd crawl back on again," Karena said. It continued for three weeks until Karena realized she was doing her best to impersonate "Lassie" and tell her something. What Karena Kirk-Drain didn’t realize was that her fur angel was trying to tell her she’d detected cancer!

Karena assumed her dog's heart-breaking cry was because Bella Boo was in pain. But after a trip to the vet, she learned Bella Boo was perfectly healthy. Bella Boo's cries became so intense that Karena knew she had to do something, especially since her precious pup continued licking and hopping on Karena's chest.

"Bella started bouncing on me, and at one point, I actually thought she'd bruised me, as I was very sore there."

"And I was feeling around, and I actually felt a lump, and I was thinking, ‘Is that a lump inside?'"

Karena found the lump and called her doctor. They confirmed Bella Boo knew something was wrong; Karena had breast cancer. She immediately went into treatment to fight her breast cancer, all because Bella Boo wouldn't stop crying.

"I didn't think dogs could detect cancer, I thought it was a lot of hoo-ha really, but this proves that they can."

RELATED: Girl’s Furry Hero Sensed Something Was Wrong More Than 5 Miles Away

"I'm just so lucky to be here; little Bella-Boo saved my life."

Karena later learned cancer had spread to her lymph nodes, and she realized that's why Bella was so determined to get her mom's attention. The cancer was killing her. "I didn't believe in that type of thing. I didn't believe that dogs could detect cancer," she said.

After she recovered, Karena decided to travel around the world and do all the things she thought she would have plenty of time to do. But Bella Boo helped her realize our days on this earth are truly numbered. Despite getting healthy, Karena knew she needed to view each day as the precious gift it is from our heavenly Father.

Karena now tells anyone and everyone who is willing to hear her story to pay attention to their pets; they just might be trying to save their lives. "Maybe if people see their dog start acting strange, they'll be able to think twice," she said.

YOU MAY ALSO LIKE: Dog Keeps Breaking into Nursery and Mom Is Fed up Until She Realizes Her Baby’s Not Breathing

"I cry to You, O LORD: "You are my refuge, my portion in the land of the living. Listen to my cry, for I am brought quite low. Rescue me from my pursuers, for they are too strong for me," Psalm 142:5-6.