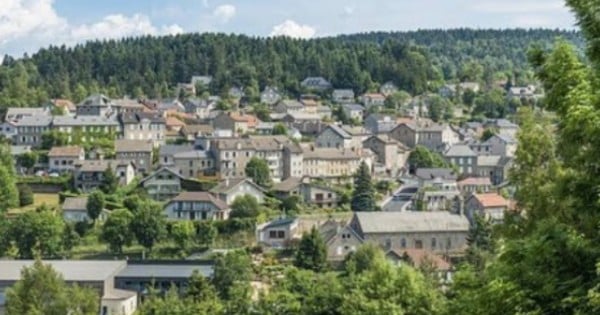 Man Never Forgot What a Small Town Did for His Family in 1943 So Years Later, He Gives Millions
Read Article »

When an image of a dog in the snow looks more like an alien on the run, it can tend to go viral. One crazy photo creation that's capturing hearts is the result of dog-owner Sadie Swicker going for the perfect panoramic shot of a winter mountainscape.

But Dewey, the fun-loving yellow lab/retriever had other plans.

RELATED: Loyal German Shepherd Sees Her Owner Collapse And Drags Him To The Phone

While dashing through the snow, Dewey's captured image morphs-which happens to moving- objects when shooting panoramas. It's a "perfect pet portrait" gone hilariously wrong, but no one seems to mind.

Family member, Sadie Swicker, explains she took Dewey along on a hike one frosty day on their family farm. When they came upon a wide snow-covered field, Sadie was inspired by the picturesque winter scene to take some panoramic shots.

To Dewey, the field was an invitation to romp. As Sadie captured the scene, Dewey zoomed and darted through the camera's viewpoint in signature playfulness.

Says Sadie, "If you’ve ever taken a panorama, you know that if a moving object goes through it, the object will look morphed and disfigured-sometimes it just looks weird, but sometimes it looks comical," Swicker said. "This is what happened when Dewey ran through the photo."

The result is a nonsensical two-legged snow creature with a random tail and gigantic grin.

What's so wonderful about the serendipitous "snow alien shot" is that it's bringing joy in a difficult winter. Comments from Dewey's fans include:

"Nothing makes me snort-laugh more than these," and, "This made me laugh so hard," and "…that is hysterical!"

It's all in a day's work for Dewey, who dog-mom Sadie says has been known to escape his yard just to go play in the nearby icy river. There's no stopping a snow-loving dog with a heart for adventure and fun!

YOU MAY ALSO LIKE: Bystanders Scream Warnings As Bear Chases Skier Down Mountain And Cameras Caught It All

“Rejoice in the Lord always; again I will say, Rejoice." Philippians 4:4