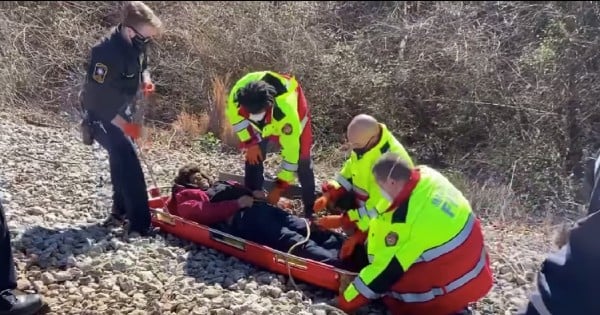 God can use anyone or anything to do His saving work, even an abandoned dog. Sadie, a loyal German Shepherd, saw her owner collapse, and she dragged him to the phone!

A man by the name of Brain needed a best friend. The kind who would stick by his side and provide some much-needed company. He went to a refuge for animals where he met Sadie. She had been at the Ramapo-Bergen Animal Refuge after her previous owner dropped her off.

When Brian met Sadie, she seemed to be an anxious dog. No one could blame her after being brought to the refuge after being with her previous family for years. After all, she thought she had a forever family until that moment. Those who took care of her at the refuge before Brian came along said she seemed to be ‘confused and lost,' but they noticed she had a heart of gold. But when Sadie met Brian, volunteers noticed how she was instantly calm around him. Brian noticed a difference too. He felt a special bond with her and he thought Sadie's hesitancy of trusting others was a sign of her intelligence.

Brian felt this blessed meeting was a sign from God to give this dog a second chance. He was confident in his decision to adopt Sadie and take her home. The pair instantly became close as Sadie became fiercely loyal to him.

Yet, he had no idea how that fierce loyalty would save his life. Brian suffered a stroke at home, all alone, except for Sadie. She intuitively knew her owner was in danger and he needed help.

Loyal German Shepherd Saves Owner After He Suffers A Stroke

God used her intelligence and loyalty to help drag him to his phone so he could call for help. Had Sadie not been there, there is no doubt Brian wouldn't be alive today. Her incredible life-saving act was shared with the refuge after Brian was taken to the hospital.

The refuge now calls her a hero. They took to Facebook stating, "Alumni Sadie saved owner's life, as she drags him to help after suffering a stroke." They added, "As is common to her breed, she is loyal and loving with her chosen people. No one could agree more than Brian, who is alive today thanks to Sadie's devotion and quick thinking. Sadie is staying with his family while Brian recovers in a rehab center. They FaceTime every night, and are counting down the days until they can reunite!"

When Brian was able to leave the hospital, Sadie was right there to greet him. Watch their sweet reunion and feel your heart grow three sizes bigger.

Without a doubt, Sadie is Brian's furry guardian angel!

YOU MAY ALSO LIKE: Elderly Woman Burned Furniture for Heat Until Officers Showed Up at Her Door

"For he will command his angels concerning you to guard you in all your ways." Psalm 91:11