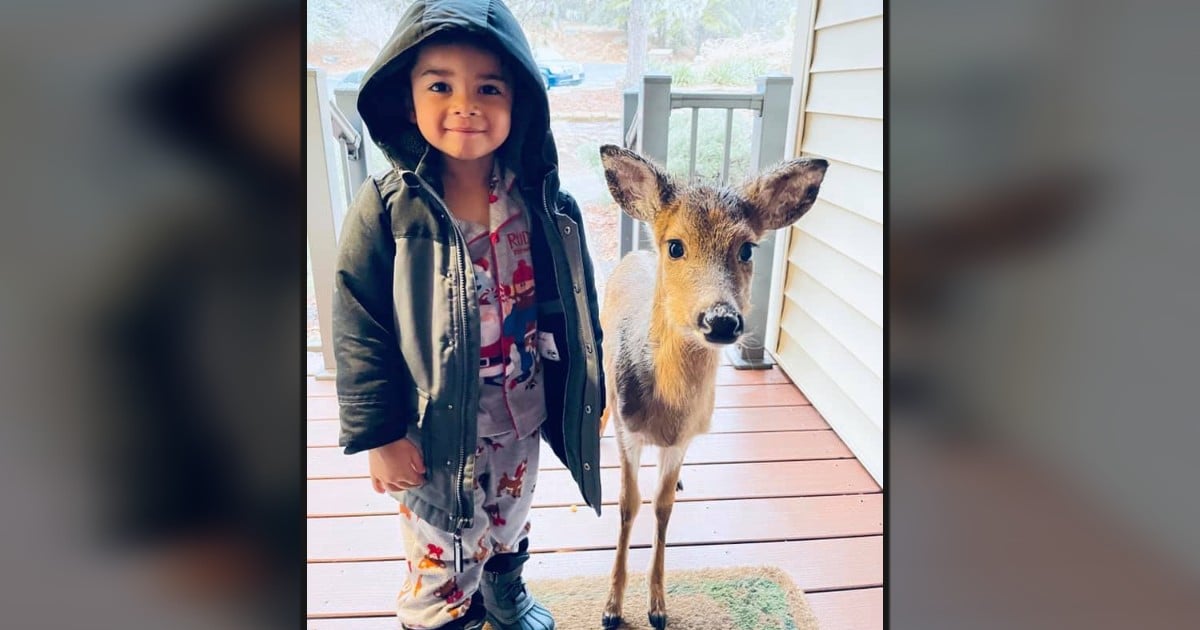 In the parking lot of the Kentucky Humane Society, someone left a dog named Ethan for dead. Given his terrible condition, the workers didn’t have much hope for him at first. But over the next few days, Ethan amazed them with his transformation and inspired the entire community!

***WARNING: Some audiences may find the mages and content too distressing***

A Good Samaritan dropping off donations at the Kentucky Humane Society alerted the animal hospital to a terrible discovery. Right there in the parking lot, someone had dumped a dying dog.

Ethan, the dog, was in horrible condition. Estimated to be around 3 years old, he should have weighed somewhere around 80 pounds. Instead, he was painfully emaciated at only 38 pounds.

“Ethan was so weak he could not lift his head. He is the thinnest dog we have ever seen that was still breathing,” the Kentucky Humane Society revealed on their Facebook page.

Workers at the Kentucky Humane Society have seen some pretty awful, heart-wrenching things. But Ethan’s case was one of the worst. Workers immediately started treating Ethan and rushed him to the animal hospital. While the medical team was determined to do everything they could to save the poor dog, they didn’t hold out much hope for his survival.

After enduring such horror, you couldn’t blame Ethan if he just gave up and succumbed to his injuries. But this incredible dog amazed everyone by doing the complete opposite!

The Kentucky Humane Society kept everyone updated on Ethan’s condition via their Facebook page. Support came from all over as folks immediately began donating and praying for the dog’s recovery.

“It really seems like our entire city has come together to pull for this special baby,” the organization said. “And we cannot explain to you how grateful we are for every single helping hand.”

Two days later, Ethan’s progress left rescuers “cautiously optimistic.” The pup had defied the odds and survived. With help, he was eating and drinking and even blessed the staff with his very first tail wag! They called it “an absolute miracle.”

The Kentucky Humane Society celebrated every time Ethan survived another night. They rejoiced as his body began to show signs of recovery. And after a few more days, they marveled as Ethan, the dog left for dead, walked for the very first time on his own!

Ethan The Dog Inspires With His Positive News Story

Ethan’s fight to overcome the unthinkable amazed all who followed his progress, including the staff working so hard to save him. Everyone was blown away and inspired as Ethan went from the dog at death’s door to a fur angel beating all the odds.

“It’s like he grew wings and flew,” said Emily Bewley, the veterinarian at the Kentucky Humane Society. “This dog has just passed all expectations. I thought he’d be months and months in rehab and he just got up and walked.”

The community has rallied around Ethan the dog, sending toys, blankets, and donations. Area restaurants have sent food to the Kentucky Humane Society for the staff working tirelessly to nurse him back to health.

And the unifying effect Ethan the dog has had is just as inspiring as his transformation.

Ethan the dog isn’t just recovering physically. The staff is seeing his playful and loving personality emerge despite the horrific things he’s endured.

“We’ve watched him go from a living skeleton to this beautiful soul who has fought with everything in him to survive,” the Kentucky Humane Society wrote in an update on Facebook. “Ethan has a special kind of resilience that has really spoken to people near and far. He is a reminder that we have the ability to overcome even the worst of circumstances.”

God has truly sent us animals for a special reason. Once hurt, it can be hard for our human hearts to heal. But this fur angel is showing us what it looks like to forgive and then trust again.

“Not only is his story incredible, but his will to continue to trust and love people is incredible as well,” Emily Bewley notes.

The donations pouring in don’t just benefit Ethan, but all of the animals at the Kentucky Humane Society. And Ethan is even helping create new laws to protect animals. His story inspired Kentucky State Representative to sponsor a bill seeking to “expand the definition of animal torture to include intentional gross neglect/abandonment.”

YOU MAY ALSO LIKE: Overlooked Shelter Dog Wants To Hold Hands And His Pitiful Pleas For Love Went Viral

What an inspiring story showing God can take even the worst circumstances and use them for good!