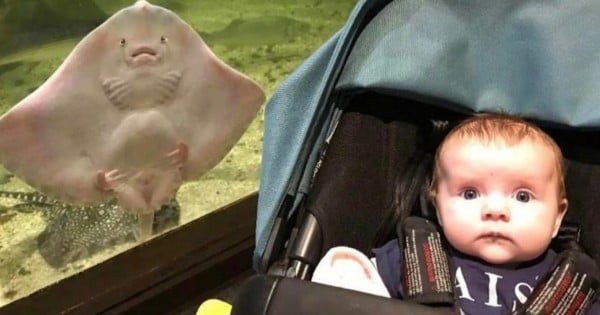 In One of the Best Animal Photobomb Photos, Baby and Stingray Are Making the Same Face
Read Article »

Meteorologist Anthony Farrell doesn’t miss a beat as his dog interrupts weather updates on an upcoming storm. And the best part? The dog’s name is Storm!

One weather reporter was interrupted by a storm during his TV broadcast, but it is not what you may think. No, it is not a storm that includes rain, thunder, or lightning. A dog named Storm interrupts the weather! What a great name for the dog of a weatherman.

Meteorologist Anthony Farrell is the owner of the dog, Storm, and recently, his little pooch surprised him by crashing his weather report!

"Yes, Storm is in the building," says Anthony as the dog is seen in front of the green screen as the temperatures for the day are shown. "Getting some treats, walking on thin air."

Anthony doesn't miss a beat as he delivers the information about the weather in Toronto. He just keeps going as Storm the dog interrupts the weather report, walking across the screen. All that dog wanted was some treats; he had no clue that he was getting his moment of fame as the highlight of the weather report!

RELATED: Cat Interrupts Weather Forecast Getting Broadcast From Home And Steals The Show

"It's live TV, so you're just going to keep going," shares Anthony as he is holding Storm during an interview. "He's a great dog though, and he's been kind of part of the family here."

I'm sure the viewers of the weather broadcast didn't mind seeing that cute little dog on the TV as they were checking out the weather for the day. It's an adorable scene that is sure to make anyone smile!

Now that four-legged Storm is much cuter than any other storm that meteorologists are used to seeing! Anthony has a great pup to keep him company and bring him smiles for days to come.

YOU MAY ALSO LIKE: Dog Interrupts Weatherman's Segment On Live TV And It's Amazing

“Let no debt remain outstanding, except the continuing debt to love one another, for whoever loves others has fulfilled the law.” Romans 13:8