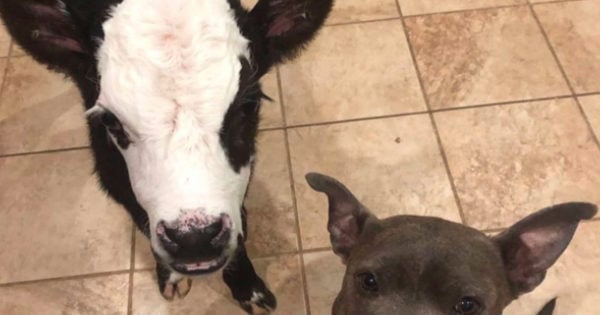 Rescued Cow Sneaks Into House Every Chance He Gets, And It’s Absolutely Adorable
Read Article »

A note next to a dejected looking dog on a bench explains how a desperate owner just wants to give their pup a better life.

Ever see a random dog on a bench, all alone without his humans?

That's how one golden retriever pup was found. He was chained with a peculiar note beside him, weighed down with a rock.

An animal shelter rescued the 7-month-old dog. The name of the shelter is Mascotas Coyoacán and is headed by Marcela Godlberg. For her, the sight of the abandoned pup was moving. But perhaps what was even more touching was what was written in the note beside the dog.

The note began (translated from Spanish), “It hurts a lot to leave my dog here but I made the decision of leaving him because my family used to mistreat him and it would always hurt me to see him in that condition.” The note continued to say, "If you're reading this and your heart wavers, please adopt him and take good care of him. If not, please leave this note in its place. That way others can read it and adopt him. Thank you."

Marcela and a fellow rescuer, Azul Galindo, found the dog.

After rescuing the animal, Marcela shared, “He was physically in good shape, but was left without water or food…he was very nervous and trying to bite anybody approaching.”

The dog was afraid of friendly neighbors who wanted to lend a hand. This forced them to use a stick to feed the dog and avoid being bitten.

Dog On A Bench Left With Note Begging For Better Life

Marcela sought the help of a dog trainer to unchain the animal safely from the bench, and with some time they did.

“He was extremely scared but did not try to bite again,” Marcela mentioned about the dog being unchained.

They eventually got him to the car and the golden retriever finally started to relax, even letting them touch him.

The note identified the dog as being named Max. As Marcela shared the pup's story online she gave him a new name to accompany his new beginning.

“He will no longer be called Max, as his name appears in the note, because he awaits a new life without remnants of his past life, of abuse and neglect. Now it will be Boston.”

“We are working with him in gaining confidence with several people, so his future home will not have an issue with people from outside the family,” she said.

“He is learning to trust and is really happy, playing with balls and behaving like a puppy should."

YOU MAY ALSO LIKE: School Snow Day Announcement Has Internet Choking Up

Boston already has a new home lined up. And thank God for that blessing.

‪¡En la revista People! 😱‬ ‪Puppy Abandoned on a Bench in Mexico with Handwritten Note Is Rescued: ‘He’s a Sweetheart’…