When dog walker Richard Gaman found a dead body on the beach, he at first thought it was a sick joke or twisted art installation. But then he realized the body was very real. And that’s when this hero jumped into action!

46-year-old Richard Gaman of Great Britain was out for a walk on the beach one chilly January morning when he came upon a frightening sight.

"I'm hoping it's someone's pretend fake art or something," dog walker Richard Gaman told the emergency operator when he called for help.

RELATED: Mom Started Praying As Doctors Were About to Call Time of Death

On the ground lay the lifeless body of a young man. He had his arms folded while laying on his back, almost like he was trying to stay warm.

“Initially I thought he was a mannequin, but then I realised he was a real person," Richard explained.

It turns out, the body belonged to a young man who’d tried taking his own life. And by the time Richard found him, things weren’t looking good. The young man wasn’t breathing, his heart wasn’t beating, and his body was very cold.

Man Who Found A Dead Body Calls For Help

"Richard was convinced the young man was dead and beyond any help,” Sarah recalled. “But I really wanted to get him to do something for the person.”

Sarah talked Richard through how to perform CPR. But it was clearly going to take a miracle to save him. The lifeless young man had been laying out in the cold for hours.

"I didn't think there was anything that could be done for him,” Richard said. “But once I'd started CPR, I was determined to keep going."

Despite the bleak circumstances, Richard performed CPR for 20 minutes until paramedics arrived.

But dog walker Richard Garman’s actions helped more than he ever imagined. His perseverance was just part of the incredible miracle God had in store! 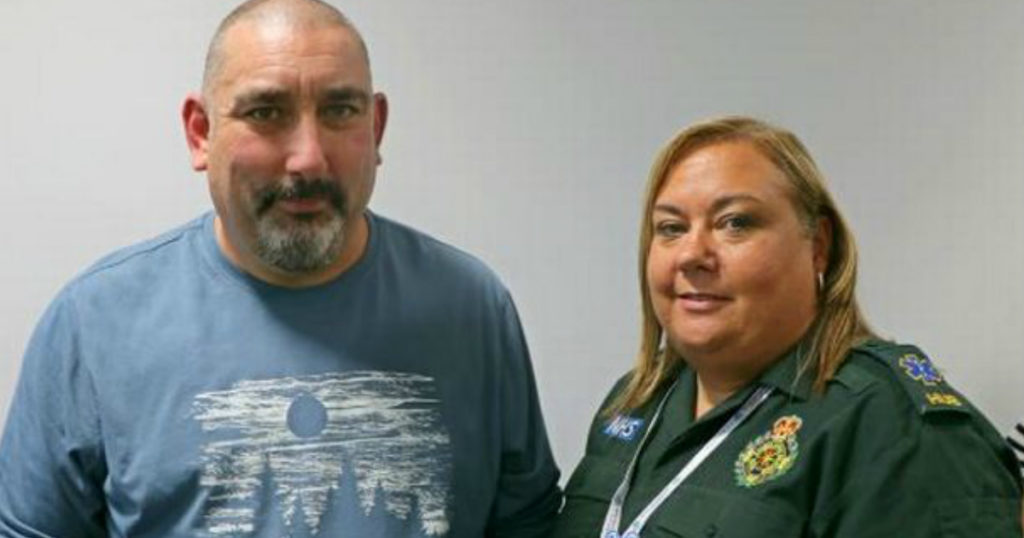 An emergency crew worked to get the young man to the hospital and provided advanced life support in an effort to save him. They measured his body temperature at 65.8 degreed Fahrenheit, way below the temp where hypothermia begins. Still, there was still a chance he’d survive.

Doctors warned the young man’s family his prognosis was grim. Hypothermia had brought upon cardiac arrest. And because of the time spent deprived of oxygen, he suffered brain damage and his lungs and kidneys were badly damaged.

Doctors used a cardiopulmonary bypass machine to keep his heart and lungs going. But they warned the man’s parents he likely wouldn’t survive the night.

But then something miraculous took place.

The man’s core body temperature began improving and his heart started beating again on its own! His condition stabilized, allowing doctors to move him into the general intensive care unit.

From there, the man showed remarkable progress over the next few weeks. He went from a deep coma on life support machines to responding to his family and even walking again. Next, doctors moved him to a brain rehabilitation center to help improve his eyesight, movement, and dealing with day-to-day life.

The family and the young man have chosen to remain anonymous. But they couldn’t be happier with the blessing of a second chance.

RELATED: Suicidal Man Survives Jump from Golden Gate Bridge And Has Message For Others

"When the police knocked on the door, I assumed the worst,” the young man’s mother said. “But so many people did exactly the right thing to help him to survive. It is a miracle. He just wasn't meant to die on that day."

The mother and son paid a visit to meet many of the rescuers from that day on the beach. And they are all just as grateful for the miraculous outcome.

"Our effort could have been futile, but his core temperature and other aspects of his condition actually gave us hope,” paramedic Aimee Hearn said. "I'm amazed that the ‘dead body' I saw on that bleak January morning is now a living person who is walking and talking."

"It is incredibly rare for a profoundly hypothermic patient in cardiac arrest to survive with such a good neurological outcome,” air ambulance critical care doctor Paddy Morgan said. “But this case broke all the rules."

"What has happened to (the patient) is fascinating from a medical and human point-of-view,” Dr Sanjoy Shah said. “He was practically dead for several hours, but he survived and has gone on to make an incredible recovery. It's almost miraculous."

And all praise dog walker Richard Gaman, for jumping in to help after he found a dead body on the beach.

"The patient was assumed dead by everyone, including myself and other medical experts on scene,” explained ambulance officer Jonathan White. And of Richard’s actions, he said, "The member of the public who did CPR showed great courage to do something to help the young man, even when he looked to all purposes beyond help."

And of course, it must have been quite traumatic for Richard Garman after he found a dead body.

“But seeing him in the hospital alive afterward made it all worthwhile,” he said.

God is ultimately to thank for this incredible miracle. But He was able to use each and every one of these individuals because the kind souls were willing to work together!

YOU MAY ALSO LIKE: Miracle Baby Comes Back To Life Just Before Being Cremated