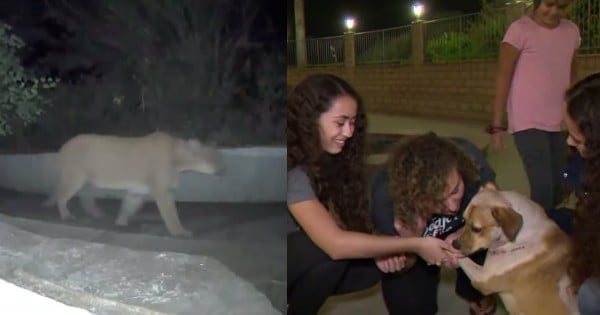 Marty, a doggy daycare worker at HappyTails Pet Resort & Spa, was in for a surprise when one of their “regulars” showed up without her human. And that’s because this dog had decided to walk herself there for an early check-in!

An employee at one of HappyTails Pet Resort & Spa's locations got a different kind of greeting than he's used to.

RELATED: 2 Loyal Dogs Come Up with a Rescue Plan to Save Owner After the 71-Year-Old Collapses

Early one morning, the doggy daycare worker noticed a dog trying to get in. It was early enough that the sun hadn't risen yet, so he waited for a human to round the corner to let their dog in.

Except, no human appeared. Being the responsible dog-sitter that he is, Marty let the cutie inside and immediately realized this was one of their regulars! But why'd she shown up without her human? And how?!

You can tell in the clip, caught by the store's security camera, that this pup clearly loves daycare. She jumped all around with her tail wagging and took it upon herself to explore the storefront. She even knew exactly which door to go play!

RELATED: Couple Wakes to Discover Injured Mystery Dog Inside Their House But All Doors Closed

The doggy daycare worker quickly looked up the owner's number to let them know that their dog showed up without them. Apparently, she had escaped their yard and walked herself right to daycare - it must be her second home! She knows exactly where to go to have a good time!

Luckily for the pup, her human said she could stay and play for the day. Even though escaping the yard isn't exactly a ‘good girl' decision, she safely made it to HappyTails on her own. That's one smart pooch! Definitely a good girl in my eyes.

After the playful pup got permission to stay, Marty let her in the playroom to say good morning to her buddies - the happiest of endings! Let's just hope she wasn't able to get out again!

YOU MAY ALSO LIKE: Excited Dog Reacts To His Daily Morning Routine With The Next Door Neighbor And It's Adorable

“Let your light so shine before men, that they may see your good works, and glorify your Father which is in heaven.” Matthew 5:16

WATCH: Dog Escapes Yard And Walks Herself To Doggy Daycare

LISTEN: Woman In Tears After She's Asked to Leave Gym for ‘Belly Hanging Out' So the Internet Steps Up | Pregnant Mom Yells for Daughter As Contractions Hit and the 9-Year-Old Delivers Her Baby Sister