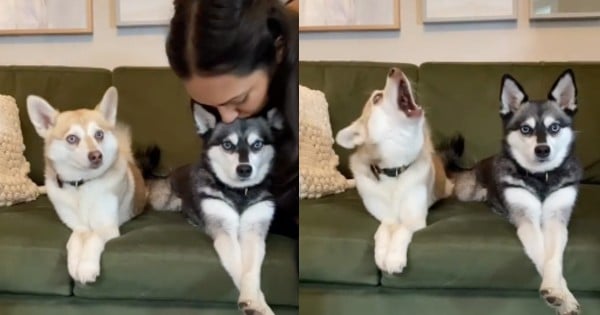 Recently, a 71-year-old man set out on a normal walk with his two dogs - a lovable and loyal Golden Retriever and an equally as lovable and loyal Black Labrador Retriever. They walked along a trail on a mountain near their home in England. Nothing out of the ordinary for this pack of three.

Soon after passing another hiker on the trail, the main began having a seizure and collapsed. A medical emergency has to be everyone's worst fear when going out on solo adventures!

Luckily, the man wasn't alone. His smart pups knew exactly what to do even though they weren't trained service animals. We don't give dogs enough credit!

The lab ran in the direction of the hiker they had recently passed while the other pup stayed by his owner's side. They definitely had to have a conversation about the plan in dog language to execute this rescue mission.

Thankfully, the black lab successfully found the hiker and encouraged her to follow him by barking and walking back toward his family. She immediately called the local emergency number to get rescue crews out there.

The Keswick Mountain Rescue Team sent out 12 rescuers unaware that 2 furry heroes were already at the scene. The man came to before the rescue team arrived, but they helped him down the mountain where an ambulance waited.

He was fine but headed to the hospital to get checked out in case. Both he and his good boys are happy and healthy after their alarming adventure.

You May Also Like: A Loyal Dog Refuses To Leave Owner's Side On The Day Of Her Funeral And It's Heart-Wrenching

I can't imagine how thankful he must be to have those loyal good boys by his side that day and every day. I hope they got a special treat for saving his life! Where would we be without our beloved pets?!