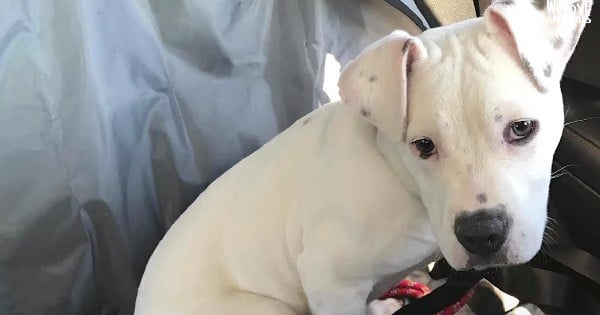 When 17-year-old Hailey Morinico sees her beloved dogs are in danger, the brave teen pushes a bear off a wall to keep her fur-babies safe.

RELATED: Pastor Hears Commotion And Steps Outside To Find A Bear With His Dog In Its Mouth

17-year-old Hailey lives with her parents and four beloved dogs at the foothills of the San Gabriel Mountains in Bradbury, California. Recently, while the family was working in their garden, Hailey heard the dogs barking around the corner of the house.

When she went to take a look, she found a momma black bear and two bear cubs on the short, brick wall around the backyard. And, at that very moment, the adult bear had picked up Hailey's smallest dog, Valentina. Hailey, admittedly, thought about only one thing, and that was the protection of her young Yorkie.

"This dog, Valentina, was in danger, really, and she is so important to the family," Hailey said.

RELATED: Man Fights A Bear Weighing 530 Pounds To Save His Beloved Dog

"She is my mother's emotional support animal, and I couldn't bear to let anything happen to her because I know, like, the pain would have been too much for my mom to handle. I think that I did this for her."

Hailey sprinted to the wall, came face-to-face with the bear. The teen gave it a passionate punch in the chest sufficient to push momma bear off the wall. She then scooped up Valentina and the others and made her escape!

It is not unusual for black bears to come around the area, particularly on Tuesday trash days, but Hailey never expected to have to fight a bear to save her precious pets. Nonetheless, she sprung into action!

Hailey's spontaneous, from-the-gut actions may not have been wise. bt the motivation for them certainly came from the heart. Teenagers often make scary choices, but they aren't often for such good and selfless reasons.

Aside from a sprained finger and a scraped knee, Hailey is just fine. Valentina and Hailey's other canine kids are as well. And, we are grateful that there are young people in the world that make bold and brave choices for the good of others!

"The wicked are afraid of everything, but those who live right are as brave as lions." Proverbs 28:1