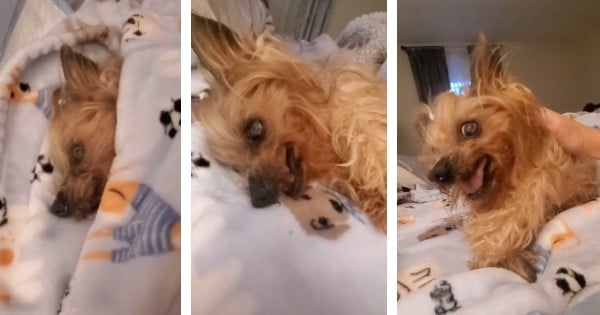 A deaf therapy dog someone labeled “broken” due to his hearing impairment was finally rescued after waiting so long for the right human to find him. And he ends up saving lives by inspiring every person he meets to be more accepting of others' differences.

Even though our brains may be much more complex, we can learn a bunch of valuable lessons from animals. Acceptance can create a world full of love, and Cole the deaf therapy dog teaches children and adults to love one another.

The Facebook page for The Team Cole Project describes the pooch's mission with, "I may be deaf, but I'm helping people hear that a disability is not an inability; it's a super power!"

Cole wasn't always loved himself. As a puppy, he was stuck in a shelter for months because his deafness labeled him as ‘special needs.' But when Cole's future human overheard someone refer to the pup as ‘broken,' the man immediately fell in love because Cole deserved it.

Chris Hannah trained his new partner with sign language and got a therapy dog license. He then brought Cole the Pitbull along with him to work, where he teaches music at an elementary school. Even as an adult I would be super excited to have a dog somewhere they usually aren't!

RELATED: Deaf Man Sees Deaf Dog For Adoption And Instantly Knows They're Meant To Be

Chris teaches the kids about the importance of accepting others' differences. He tells them about the stigma surrounding Pitbulls while Cole gently loves on every single student. This good boy loves the attention and pets!

Cole is able to show the class that he is not less than any hearing dog. He listens to commands, cuddles, and runs around to play with them.

Chris and Cole now travel to other schools to talk to kids about differences and acceptance. The duo presents complex thoughts in a way that young children can understand.

Inspiring Others And Spreading God’s Love

That's not Cole's only vest. He also works as a therapy dog at the NJ Veteran's Memorial Home and the local hospice. He literally wears different vests for each job!

The Covid restrictions didn't stop his service. He paraded around the area in his dad's car so the kids could still see him. He also continued visits at the nursing home and hospice through windows and doors. The positive pup spreads love across his region no matter what!

Cole may not know it, but he is spreading God's love. We should all strive to be more like Cole.

YOU MAY ALSO LIKE: Earless Rescue Cat No One Wanted Rescues His Human

“We love, because he first loved us. If a man say, I love God, and hateth his brother, he is a liar: for he that loveth not his brother whom he hath seen, cannot love God whom he hath not seen. And this commandment have we from him, That he who loveth God love his brother also.” 1 John 4:19-21