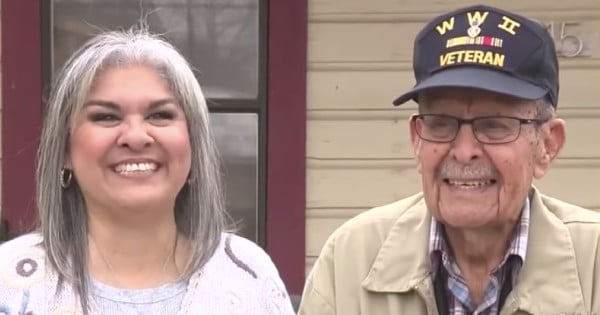 A newlywed couple stepped out onto a frozen pond and skated their first dance on ice to Ed Sheran's ‘Perfect.' And it was definitely just that–perfect!

Now, most couples know they need to practice not only how they will greet their guests after becoming newlyweds, but they will also practice their first dance. Some couples will even hire a dance instructor or take dance lessons.

RELATED: Rascal Flatts Crashed A Wedding And Surprised The Couple With A Song For Their First Dance

But one couple took a completely different spin. Instead of dancing, they skated their first dance on the ice of a frozen pond to Ed Sheeran's song, ‘Perfect.‘

“I found a love for me

Oh darling, just dive right in and follow my lead

Well, I found a girl, beautiful and sweet

Oh, I never knew you were the someone waiting for me”

And the best part? Their dance was so romantic and the perfect representation of what it is like when two become one that their first dance on ice went viral! Leah and Devinder are not only both figure skaters, they were also soon to be newlyweds.

RELATED: Brother And Sister Figure Skaters Tap Into Heavy Metal For Their Routine And It's Spectacular

They posted their figure skating video online. But what they didn't realize was that when they posted their pre-wedding ‘dance' video of them skating, that it would go viral. With over half a million views and counting, their moment captures what it means to be in love!

In the video, it shows the couple standing on the edge of a pond surrounded by houses and the woods. Snow is on the ground and it looks like a magical winter wonderland.

But what happens next leaves viewers breathless. The couple elegantly skates out onto the pond to Ed Sheeran's song, ‘Perfect.' It begins with Devinder going out solo on the ice before he skates back around to ask Leah if he could have this dance. And the rest of the video is just magical.

Between the way the couple sync up their moves and the words of Ed's song, it is the perfect picture of two becoming one.

“Set me as a seal upon your heart, as a seal upon your arm, for love is strong as death, jealousy is fierce as the grave. Its flashes are flashes of fire, the very flame of the LORD. Many waters cannot quench love, neither can floods drown it. If a man offered for love all the wealth of his house, he would be utterly despised.” Song of Solomon 8:6-7.

LISTEN: Electrician Fixes Struggling Couple's Heat For Free So They Trick Him Into Returning