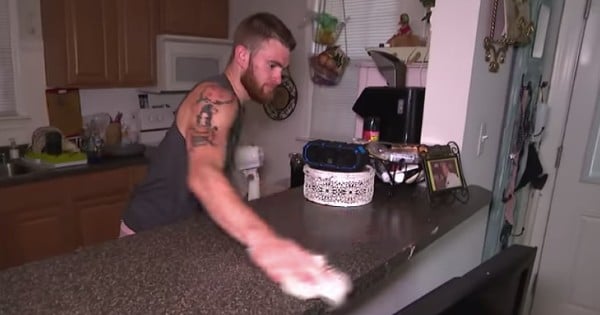 California mom Alyssa Stanghellini was feeling pretty anxious by the time she got checked into Dignity Hospital in Merced, CA., and she didn't even know she had an injured doctor awaiting her!

She had gone into labor earlier in the evening and was experiencing a great deal of pain. In communications with her physician, Dr. George Alkhouri, Alyssa had learned that her baby's heart rate had slowed greatly and his umbilical cord was wrapped around his neck. That's a lot to take in!

Even so, Alyssa would have been even more fearful if she'd known what Dr. Alkhouri had gone through before ever getting to the hospital that night.

Dr. Alkhouri had been monitoring Alyssa's situation by phone from his home. So he knew he needed to get to the hospital and that the delivery of Alyssa's baby would most likely take place by cesarean section. The commute time from Dr. Alkhouri's home to the hospital is about ten minutes, but on that day what should be a quick trip became considerably longer.

Doctor Gets Into Crash On Way To Hospital

Unfortunately, Dr. Alkhouri was hit by a drunk driver on his way to the medical center. His car was badly damaged, and he sustained serious injuries.

After getting out to check on the other driver, the injured doctor was able to contact 911 even though his own phone was not working.

When an officer arrived on the scene, Dr. Alkhouri borrowed a phone, called the labor-and-delivery charge nurse, and informed her what had taken place. The police officer heard the exchange and then allowed Dr. Alkhouri to leave.

Once at the hospital, the injured doctor went right to Alyssa, performing surgery and delivering her son while standing on one leg, the other in pain and bloody. His face had glass shards in it from the shattering of the windshield.

In spite of all of that, Alssya's son, Bradley, was born healthy at 1:03 AM. Dr. Alkhouri's wounds are now healing. Mom Alyssa learned about Dr. Alkhouri's accident a few days after Bradley was born. And she could not be more grateful to the injured doctor who did everything in his power to make sure Baby Bradley came into the world unscathed!

“I feel like God had his hand over the situation, so I’m just very grateful that Dr. Alkhouri was able to make it even though he was injured,” Alyssa shared. “I don’t know if we would have Bradley here if he wasn’t able to make it.”

YOU MAY ALSO LIKE: Nurse Emerges From Interstate Pile-Up That Ended 6 Lives And Heads Straight To Work