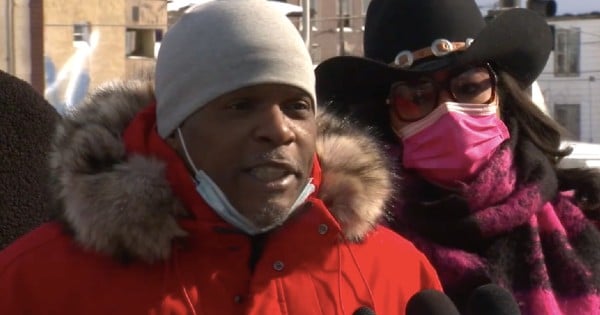 After a fatal interstate pile-up left a Texas nurse pinned between multiple tractor-trailer trucks, she began to wonder whether she would be able to escape the car where she was now trapped, but after a kind stranger found and freed her, her first instinct was to go straight to work.

When Texan nurse Rebecca Benson left her house for work one wintery morning, she didn't think twice about the condition of the roads. Continuing along her normal work route, Rebecca began to think something might be up when she took a turn and lost traction on a patch of black ice she was unable to see.

RELATED: Mystery Angel Shows Up To Protect Teen After Car Crash And Then Vanishes Afterward

“My car started to kind of spin out a little bit, but nothing crazy,” Rebecca told reporters. “So I was adjusting, and while I was coming around the corner, I could just see cars in front of me... There was a Coca-Cola semi and a car hauler semi that had kind of made almost like a triangle. I pointed the car there and prayed to God that I would be okay, and that’s when I hit them.”

Preliminary information on MCI in Fort Worth. More info will be released later. At least 100 vehicles involved, 5 fatalities, 36 transported to local hospitals. #yourFWFD continues to work the incident and will be on scene for several hours. pic.twitter.com/DUtRJFKSI9

As a nurse, Rebecca had the medical intuition to properly prepare for the unavoidable crash ahead of her. Rather than tensing up, Rebecca made an effort to relax her body as much as possible in preparation for the impact.

Rebecca made her impact without any major injuries. But she now found herself trapped inside her car amongst the wreckage. She could feel cars and semis continue to smash into the interstate pile-up.

A brave stranger eventually opened Rebecca's trunk and Rebecca was able to crawl out through the trunk and escape unscathed. Coincidentally, Rebecca's coworker happened to be on the other side of the highway that morning, and so after hopping the median and walking up the road, Rebecca decided the best thing to do would be to catch a ride to work.

Despite her horrifying morning, Rebecca worked half a day helping others before her husband finally convinced her to go in and get checked up herself.

Aside from some superficial scrapes and bruises, Rebecca miraculously came out of the 100-vehicle interstate pile-up without any serious injuries.

“Heal the sick, raise the dead, cleanse those who have leprosy, drive out demons. Freely you have received; freely give.” Matthew 10:8

WATCH: Nurse Crawls Out of Interstate Pile-Up Wreckage and Goes to Work