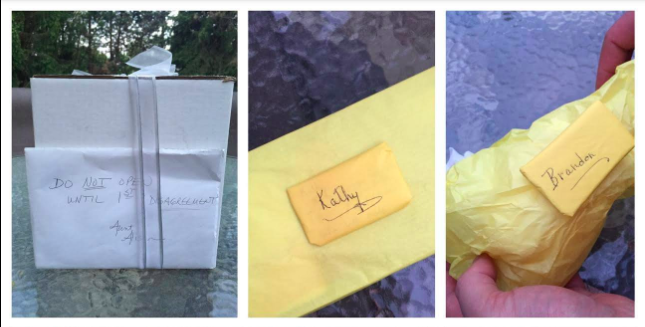 When Ryan Turpin hears his late grandpa’s voice coming from his new teddy bear, the sweet boy can’t help but burst into tears. And the touching moment is so sweet!

Some of this young boy's memories will fade over time, others will remain. But this grandson will never forget his grandpa’s voice thanks to his new teddy bear. And the sweet moment he receives the gift was even more poignant since his grandfather passed away.

The special teddy bear even shares the same nickname as Ryan's nickname ‘Bubba Lou' for his late grandfather, Terry.

"I miss him so much," the young boy said through tears and a strained voice.

Ryan's mother, Jessica Turpin, explained how Ryan gave his grandad the nickname. "So he goes by Terry, but he started to call Ryan, Bubba Lou, when Ryan was little. Um and so, when Ryan first started talking, he would just say, ‘Bubba Lou,' because he associated it with grandpa."

Ryan has a leukemia diagnosis, which he received in 2018. Ryan's grandfather helped make Leukemia all the more manageable with his emotional support.

Terry was a very loving and involved grandparent. He spent a lot of time with Ryan and his brother, taking them to sports games and getting in a lot of quality time before his eventual passing.

The beloved and active grandfather's death was not foreseen when it happened.

Back in March of 2020, Terry contracted the coronavirus and became ill. After two months of bravely battling the illness, he sadly passed away.

Jessica had the unfortunate duty of explaining Terry's death to Ryan. He didn't take the news well.

Mom Turns Late Grandpa’s Voice Into Gift For Her Son

To help her son cope, Jessica came up with the idea of using voicemails she had of Terry saved on her phone. She compiled the recordings and sent the material to Build-A-Bear.

They sent back a bear with the grandpa's voice.

According to his mother, Ryan was comforted to hear his grandpa’s voice coming from the bear.

The sight of the child crying is heartwarming as it is heartbreaking. The COVID-19 pandemic brought a lot of pain and suffering, including death. May we all be comforted by the fact that though our circumstances and seasons of life are in a constant change, Jesus is always the same.

May our knowledge and awareness of Him comfort us when we experience such hardships as Ryan.

"Jesus Christ the same yesterday, and to day, and for ever." Hebrews 13:8