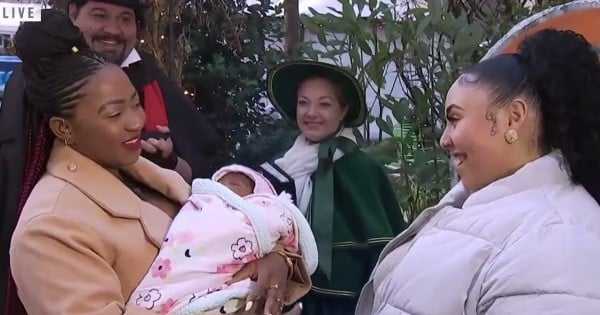 After Leslie McCaddon lost her veteran husband, she and her children met Gary Sinise at the Snowball Express program put on by the actor’s foundation. Gary made a promise to Leslie that day and honored it for years to come. And Leslie recalls how it helped bring redemption to the family’s story of tragedy.

For Leslie McCaddon, things started out like a Hallmark love story. She met her husband when he was a soldier in the bomb squad in Oklahoma. They weathered his service and deployments, fell in love, got married, and had four kids.

But then, things took a tragic turn.

Leslie McCaddon’s husband began working in the medical field. But he also began struggling “with emotional regulation and suicidal ideation  —  maybe caused by his time on the bomb squad, or maybe not.”

Things got so bad, Leslie eventually realized she and her kids needed some separation from her husband. She hadn’t stopped loving him but wanted to keep her children safe.

While Leslie and her kids were away, her husband committed suicide in “the labor and delivery wing of the same hospital where he was a beloved, respected and up and coming OB/GYN resident.”

The tragedy rocked Leslie McCaddon and her children. She tried to pick up the pieces, tried to find the happy ending, but kept coming up short.

But then, God brought redemption to this tragic story in the most unexpected way!

During the family’s second Christmas since her husband’s suicide, Leslie McCaddon and her children attended a Snowball Express charity event in Dallas put on by the Gary Sinise Foundation. Leslie had the honor of meeting Gary Sinise face-to-face at the event, where he made her a promise.

“I don't know if it was the tone of his voice, the warmth in his eyes, or the grip of his hug  – whatever it was, it felt true,” Leslie recalled. “I believed him.”

Year after year, Leslie says Gary Sinise and his foundation have never stopped showing up.

“The Gary Sinise Foundation shows up for my kids, and thousands of others, for the annual Snowball Express event right before Christmas,” she says. “Right at the end of the year, when our broken hearts aren't sure they can take one more day of grief, they give us a tsunami of love and an ever-flowing river of new memories.”

And year after year, Gary personally meets Leslie McCaddon and her family at the airport and greets each of them. By name.

RELATED: Navy Vet Is Brought To Tears As Gary Sinise Reveals His Entire Mortgage Is Paid Off

Even though the event looked very different amidst the COVID-19 pandemic, the foundation managed to pull off the Snowball Express event virtually. And Leslie’s kids still had so much fun and got so much out of the experience.

As the widow sat back and watched her kids participate, laughing and sharing memories of their late father, she finally saw the redemption she’d sought for so long. Against all the odds, Leslie McCaddon and her children had found triumph in tragedy. And Gary Sinise’s promise was a big part of that.

“My kids have emerged as the sort of human beings who are looking for where they can spread love like it has been showered on them. They want to be like their Dad. And, they want to be like Gary Sinise,” Leslie wrote. “Somehow Hollywood, with all its bad rap for being a place of selfish ambition and insatiable vanity has, for us, become the backdrop of selfless service. Each year, multiple celebrities and thousands of volunteers show my kids that the most rewarding thing any of them could ever do with their lives is to help others. To serve, to be grateful, to inspire.”

RELATED: Gary Sinise Video Has A Powerful Message For Those On The Frontlines Of The Pandemic

Be sure to read the full story of redemption, written beautifully by Leslie McCaddon herself, HERE.

Leslie’s positive news story reminds us that God always has redemption waiting for us just around the corner. Not only does Leslie McCaddon now use her incredible talent as a writer to inspire others, she also heads up Widows Like Us. There, she uses the tragedies she’s endured to help encourage others facing similar adversities in their own lives.

And this is how God works.

We live in a broken world where evil exists. God doesn’t cause the bad things that happen in our lives. But He does make provisions to use all of our struggles and tragedies for a greater cause.

Lean into Him today. Give over all of your troubles and worries to Him. And look for the redemption He already has waiting for you!

YOU MAY ALSO LIKE: Gary Sinise Has Special Thank You for American Hero Who Nearly Lost His Life Serving the Country

“Humble yourselves therefore under the mighty hand of God, that He may exalt you in due time; casting all your worries on Him, because He cares for you. Be sober and self-controlled. Be watchful. Your adversary, the devil, walks around like a roaring lion, seeking whom he may devour. Withstand him steadfast in your faith, knowing that your brothers who are in the world are undergoing the same sufferings. But may the God of all grace, who called you to his eternal glory by Christ Jesus, after you have suffered a little while, perfect, establish, strengthen, and settle you.” 1 Peter 5: 6-10