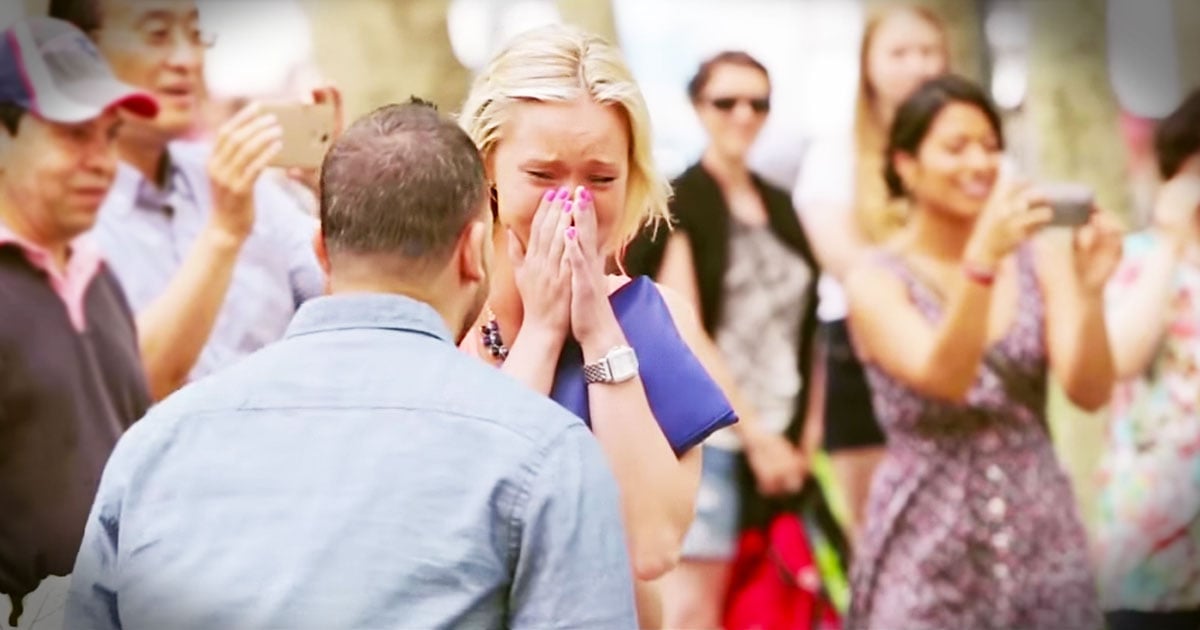 God Uses A Rodeo For A Divine Appointment

Children are truly a blessing from God, and in a perfect world, every child would be born into a loving family. But sadly, that is not the case. Which is exactly why adoption is such a noble act of pure love. I have such a deep respect for the adoptive parents that pledge to take in an unwanted and often damaged child to give them the love and nurturing they so rightly deserve.

Charity and Brenton Robinson are one of these amazing couples. They had recently adopted a little boy named Lincoln, who they affectionately call "Linc." They decided to take Linc and their other son, Tripp, to the rodeo for a day of fun. What they didn't know was that God had planned that rodeo to be a life changing event for the whole family!

For reasons known only to Linc and his Creator, the little boy was drawn to a kind looking man with an easy going grin and a cowboy hat. He walked right up to this anonymous cowboy and began excitedly talking all about the sights and sounds of the rodeo. His parents were beyond shocked by the boys behavior.

You see, Linc did not come to them as your typical little boy, full of energy and a mischievous sense of curiosity. The life he'd left behind had left him with an extreme fear of people and a speech disorder, among other things. So to see him interacting so casually with this stranger was completely unexpected.

Dear stranger next to us at the rodeo,When my son came up to you and grabbed your arm, you didn’t know he used to be…

Charity quickly snapped a photo, which she shared on FaceBook with a heartfelt message that read:

"Dear stranger next to us at the rodeo,

When my son came up to you and grabbed your arm, you didn't know he used to be terrified of people.

When he talked to you about the bulls, you didn't know he was diagnosed with a language disorder.

When he jumped in your lap and laughed as you tickled him, you didn't know he had a sensory processing disorder.

You also didn't know as his mother, I sat in my seat, with tears running down my face, sneaking this photo. When we adopted him a few short months ago, we didn't know how long it would take for him to laugh, play and engage others like this.
You didn't know any of this, but you took time to connect with a child who has had to fight to learn to connect. My heart is full. Thank you."

The emotional post about this random act of kindness quickly went viral. And soon, Charity and her family learned that this "chance encounter" was in fact a divine appointment.

The identity of the anonymous cowboy belonged to Jason Taylor, a preacher at a nearby church. When his daughters and some of his congregation shared Charity's post with Jason, he knew God was at work. He had recently been preaching on Luke 9:48 where Jesus talks about welcoming children. And then a little boy crawled into his lap, and he explains that:

“It was, kind of, the Scripture lived out.”

Charity and the family went the next day to Jason's church and just spent time worshiping and praising. Charity knows that the church is right where God wants them, writing on FaceBook:

"Last night when I shared that photo, he was a stranger. Today he is a friend we sat next to in church…When we went to bed I had no idea when I woke up that post would be shared by so many. I also had no idea God’s plan for us was to drive 45 minutes to his church to be blessed by Jason, his message and his sweet congregation. So lucky that God made sure our paths crossed last night." 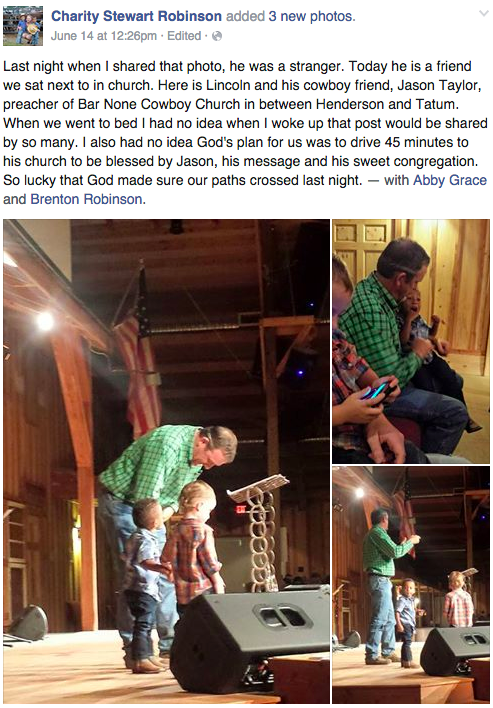 Jason and the Robinson family clearly recognize that their meeting was a part of God's plan all along. And the encounter has bonded the two families forever in a unique way. Jason summed it up beautifully when he said:

“With everything that is happening and the tragedy that's just taken place, our country, for a while, has been in a pretty good mess. If you look at Lincoln — Lincoln didn’t focus on the differences that we have. Because in every area there are differences. And if we focus on differences, it always divides. Lincoln just found the common bond, and that common bond is the love of Jesus. So, that's what united me and Lincoln. I think the greater message is…if we just quit worrying about what makes us all different and start finding something that makes us all one, we'll all be better.”

And just as Jason suggested, God does not want us to focus on our differences. There will always be differences. But what we all have in common is that we are children of God. He created each one of us and His desire is for us to love one another, just as He loves us.

"My loved ones, let us have love for one another: because love is of God, and everyone who has love is a child of God and has knowledge of God." 1 John 4:7