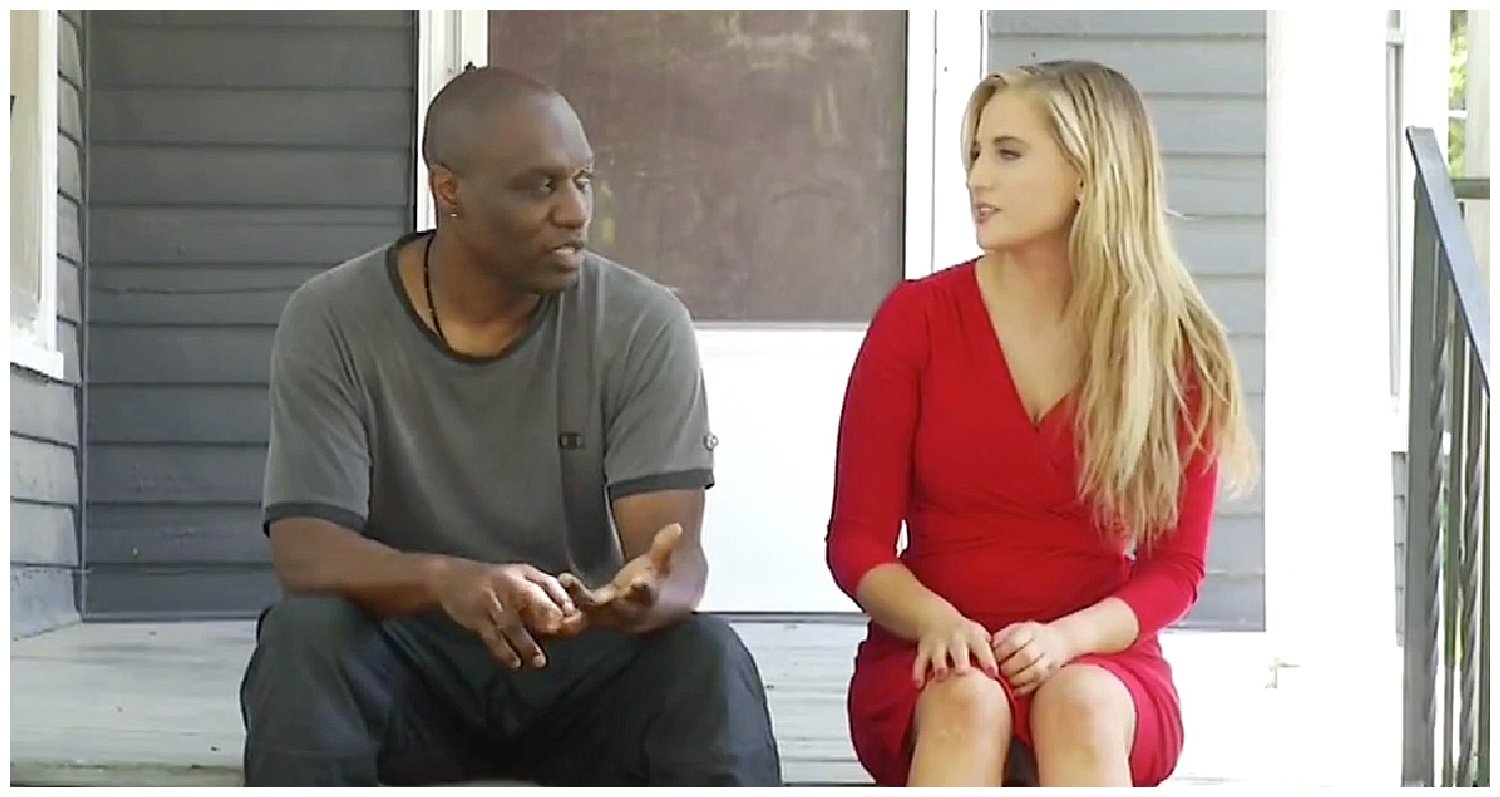 Can Cracking Your Own Neck Cause A Stroke?
Read Article »

Rebecca Tafaro Boyer says many of her friends and family consider her a “super annoying overprotective mom.” But when her husband sent her a photo of her infant son, the mom sent a nagging text pointing out the car seat mistake she’d spotted. And it saved her son’s life!

Rebecca Tafaro Boyer is a nurse from Memphis, Tennessee. And when her maternity leave came to an end, she hated leaving her 3-month-old son, William. Fortunately, William would be spending that first day with his Daddy, David.

RELATED: Their Son Died At Daycare, So His Grieving Parents Share This Warning

So, Rebecca asked David to send her regular updates and photos of William.

As David prepared to head out and run errands, he snapped a photo of their baby boy in the back seat of the car. But when Rebecca got his text, she instantly spotted something wrong.

"When I actually looked at the picture he sent, I realized that the car seat really wasn't safely secured," she explains. 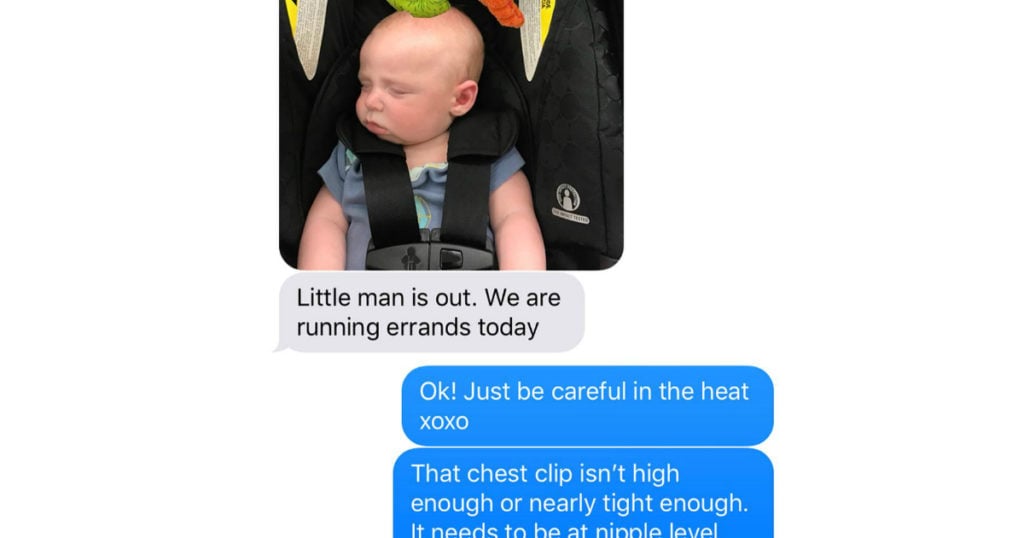 The observant nurse noticed the straps of the seat were hanging loose and the chest clip was resting too low on William's chest. Rebecca is used to her friends and family considering her a “super annoying overprotective mom.” But even though she knew it would probably make her husband roll his eyes at her, the mom sent a nagging text pointing out the mistake.

"I just sent him a quick text and said, ‘Hey, fix the car seat,' basically,” she recalls.

And thank God she did! That “nagging” text most likely spared her son from serious injury.

Thankfully, David listened to his wife and adjusted William’s straps. Because just a few moments later, a car steered into his path when making a left turn at an intersection and they crashed at 50 miles per hour!

The car was totaled in the accident. But thanks to Rebecca’s text, William’s car seat kept him safe and secure.

"I pulled up to the scene of the crash, and I saw an ambulance and four cop cars," Rebecca recalls. "Finally I saw my husband standing on the side of the road with my baby, and they were just laughing. At that point, I felt better. I was like, ‘Okay.' I didn't realize I couldn't breathe until that moment." 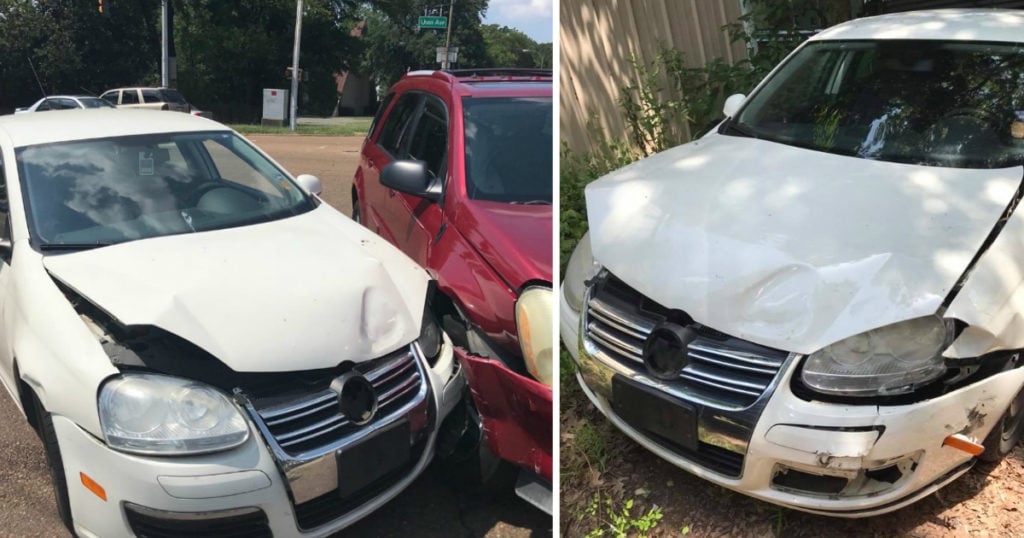 David suffered three dislocated toes and a break to his foot in three places. But thankfully his injuries didn’t require surgery and doctors expect him to make a full recovery. And Rebecca is focusing on all of the blessings to come out of the terrifying experience.

“Tonight I am on my knees thanking God for watching over my two precious boys,” she wrote on Facebook. “And thanking my husband – who has finally proven that yes indeed he is actually listening when I nag him!”

Post About How Mom Sent A Nagging Text Goes Viral

Rebecca shared her family’s close call on Facebook as a caution to other parents about the importance of car seat safety. 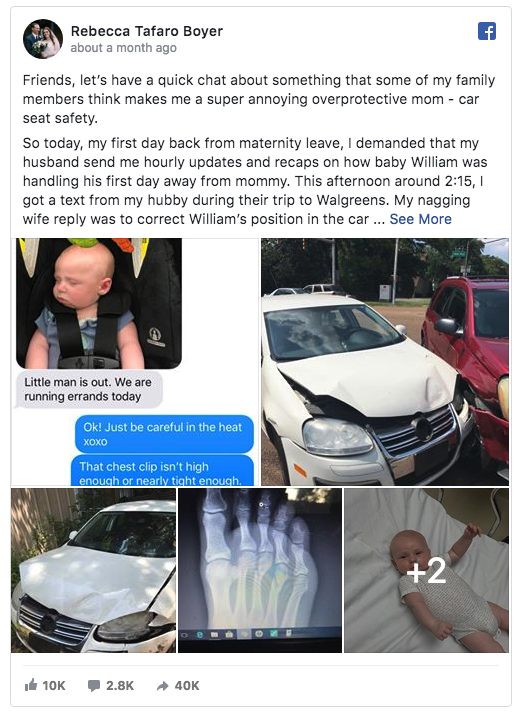 And this awesome family is using their experience to help in other ways, too.

According to the National Highway Traffic Safety Administration, any car seat involved in an accident should be thrown away. But rather than just chuck it out, Rebecca and David donated it the NICU at Le Bonheur Children’s Hospital so they could use it to educate new parents on how to use a car seat properly for their newborn.

Then, when their insurance company offered to replace their damaged car seat for free, the couple decided to help someone else, instead. They requested the insurance company send the car seat to a local nonprofit organization that focuses on meeting the basic, everyday needs of the families of children with critical or chronic illnesses.

We’re so thankful Rebecca had the courage to speak up and that little William is safe and sound. What an important reminder for all of us!

YOU MAY ALSO LIKE: Dad Sends Hilarious Texts To His Wife After Their Son Vomits