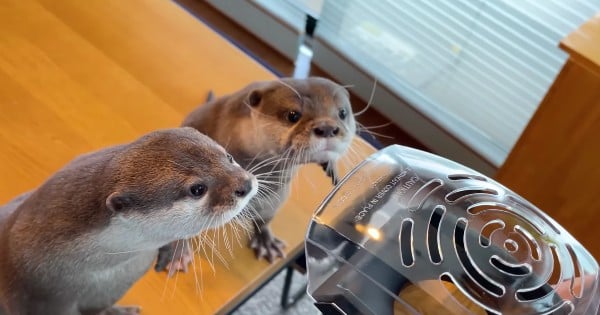 2 Adorable Otters, Hana And Kotaro, See A Popcorn Machine And Their Reaction Is Priceless
Read Article »

Have you ever seen a wild animal become friends with a domestic pet? Well, this friendship between a pit bull and a deer is the cutest thing you'll see all day. Most of the time, deer run away from humans and other animals, but this deer just really wanted to play.

TikTok user, Brennalina, posted a video of her parents' dog meeting the female deer that has lived on their property for years. She said, "At first we thought the deer was pissed and guarding her hidden babies."

RELATED: 4-Year-Old Goes Outside To Play And Then Mom Spots The Boy With A Deer

Luckily, the doe had something else in mind.

Zola the pit bull probably didn't expect to make friends with one of those large, tan animals she's only seen through windows. But deer are kind of just large dogs, right?

Once the two realized they were friends and not enemies, the deer started returning every evening to play with her canine friend.

In the video, Zola runs past the deer and quickly turns around to stare at the deer. The deer seems ready to play along and chase her new buddy. She bounces after Zola as she continues zooming around the yard. The two goofy animals seem to love teasing each other.

RELATED: Grandma Spots Baby Foxes Playing And Seeing Them Having Such A Blast Will Brighten Any Day

The video has almost 700,00 likes and has been viewed about four million times. Brennalina appropriately changed her profile bio to, "I guess people like deer and pit bulls being friends." Of course, we do! The internet adores unlikely animal friendships!

A bunch of people asked to see more of their friendship, so she shared another video of the pair chasing each other. The two take turns charging at each other as if they're just two dogs that speak the same language. Animals' ability to communicate with other species is simply incredible!

Momma deer and her canine companion ##wildlife ##dog ##pitbull ##4u

Since Zola appears to have endless energy, she hates when her deer buddy leaves for the night, and the lonely pit bull stares off into the bushes at the end of the clip. But she'll probably be waiting for her buddy the following evening!

You May Also Like: Cameras Caught Dog Kissing Dolphin And the Adorable Photo of the Unlikely Friends Went Viral

Be kindly affectioned one to another with brotherly love; in honour preferring one another Romans 12:10