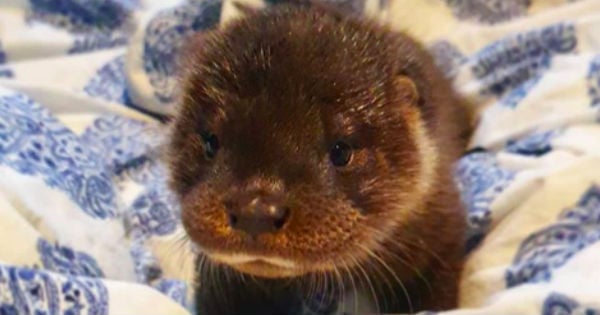 In this funny story, one Pitbull thinks he's a cat and loves following his cat siblings around, no matter where they climb!

Bethany and Samantha Castiller recently adopted Mako, a two-year-old pup, from their local shelter. "When we went to the pet shelter, Mako had looked over his shoulder and gave us direct eye contact and we just fell in love with the little guy," Bethany said. "At the time, he looked like a bobblehead because his head was so much larger than his body. We just thought he was adorable."

RELATED: Dog Was Disfigured When He Was A Puppy But Now He's Busy Helping Humans with Disabilities

When Bethany and Samantha brought Mako home, they were hoping that he would get along with the two cats that they already had as pets. "We initially kept the cats in a separate part of the house because we wanted to slowly introduce them to the new dog," Bethany shared.

Once Mako made himself at home, Bethany and Samantha started to notice some of his strange behaviors. "He started jumping up on the small tables we had around the house and we thought he was just super excited and full of energy," said Bethany.

Pitbull Introduced To His Cat Siblings

Then, once Mako was introduced to the cats, it was clear that his actions mimicked those of his cat siblings! "They would be on the counters and he would jump up there with them,” Bethany said. “He just wanted to be around them all the time."

YOU MAY ALSO LIKE: An Abandoned Baby Otter Made Some Unlikely Friends And The Story Behind Is So Touching

Mako's impressive climbing skills have made him a social media star, with thousands of followers on Instagram and TikTok. But Mako doesn't care about his newfound fame, he just wants to hang out with his cat friends and be wherever they are!

LISTEN: Inspirational True Story of the Rescue of a Dog with a Pig Face