Praise, My Soul, Oh King of Heaven from soundingjoy on GodTube.

“Praise, My Soul” is a great example of the appreciation for God’s sovereignty commonly found in Christian songs and gospel. The classic hymn was even played as part of America’s 41st president George H.W. Bush’s funeral service. Find the lyrics and story for this heartwarming hymn below!

RELATED: The Story Behind The Hymn ‘It Is Well With My Soul'

Inspired by Psalm 103, this joyous hymn praises the glory of God, “King of Heaven.” We are encouraged to give our lives to God, and will be “ransomed, healed, restored, forgiven.” 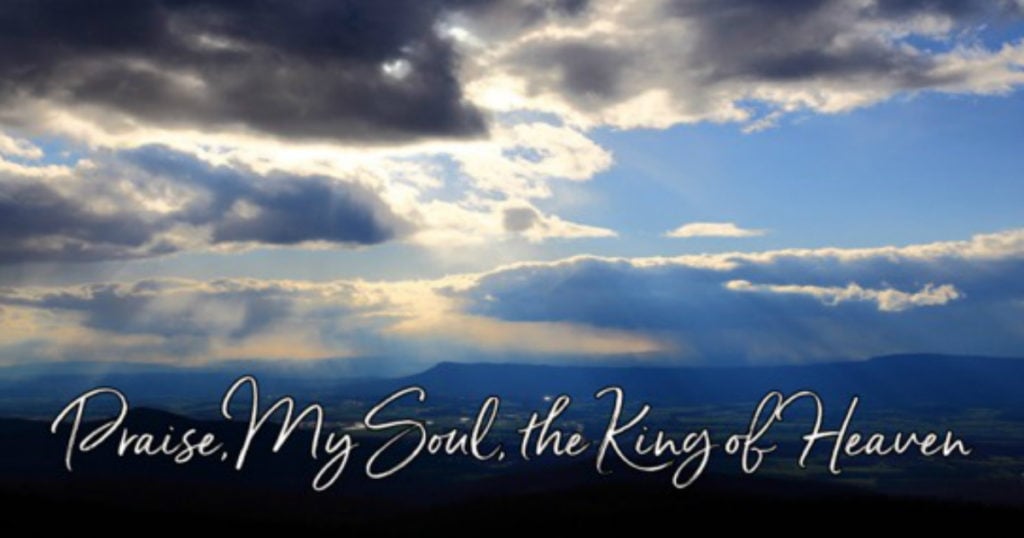 2 Praise him for his grace and favor
to his people in distress.
Praise him, still the same as ever,
slow to chide, and swift to bless.
Alleluia, alleluia!
Glorious in his faithfulness!

3 Fatherlike he tends and spares us;
well our feeble frame he knows.
In his hand he gently bears us,
rescues us from all our foes.
Alleluia, alleluia!
Widely yet his mercy flows!

4 Angels, help us to adore him;
you behold him face to face.
Sun and moon, bow down before him,
dwellers all in time and space.
Alleluia, alleluia!
Praise with us the God of grace!

The Story Behind Praise, My Soul, the King of Heaven

“Praise, My Soul, the King of Heaven” was written by Henry Francis Lyte. The hymn is frequently sung in the United Kingdom and was used in the 1947 royal wedding of H.R.H. Princess Elizabeth, now Queen Elizabeth II, and Prince Philip, Duke of Edinburgh. Born in Scotland and educated at Enniskillen and Trinity College in Dublin, Lyte’s most important position was Anglican curate at Lower Brixham, Devonshire, England, where he served for 24 years.

The popularity of this hymn has been significantly helped by LAUDA ANIMA, John Goss’ melody written in 1869 for these lyrics. Its listing in Hymns Ancient and Modern (1875 edition) and in The English Hymnal (1906) have made it one of the most broadly sung Victorian hymns.

The hymn experienced a resurgence when it was played during the funeral service at the Washington National Cathedral honoring America’s 41st president, George H.W. Bush, who passed away November 30, 2018, at the age of 94.

Popular Hymn Lyrics with Story and Meaning
Day by Day and With Each Passing Moment
Jesus Loves Me
What a Friend We Have in Jesus
Blessed Assurance
Nearer My God to Thee
Abide with Me
His Eye is On the Sparrow
Be Thou My Vision
Holy, Holy, Holy Lord God Almighty
Amazing Grace