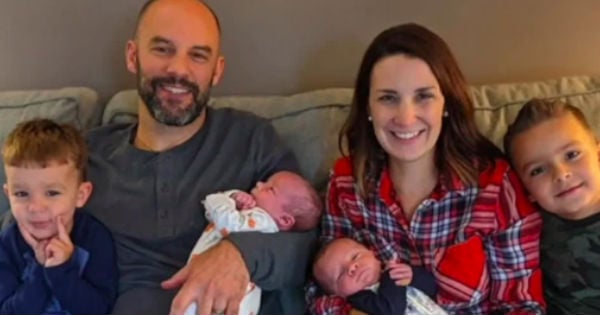 A premature newborn baby the size of a Superman toy looks so different after his miraculous survival!

The birth of a child can be a wonderful experience, but it can also be super scary, especially if that child is in danger.

RELATED: Man Amazed Doctors And Came Back From The Dead After His Heart Stopped For 45 Minutes

For Logan Ray, he was born prematurely at 23-weeks old. Logan was so small that he was the size of the Superman toy gifted to him when he was born. When weighed for the first time, he was about 1.5 lbs and only 12-inches long. So small, that his parents took a picture beside his Superman toy for comparison.

Val shared, "We had nurses suggest putting something next to him to compare size-wise. I didn't want to leave the hospital so I had Rob go out instead. ‘I told him to pick out something that he thought would be appropriate like a doll that we could disinfect and put inside the incubator. ‘He called me and said what about Superman? I thought it was perfect!"

Valerie Ray said that she was 21 weeks pregnant when she first suspected that something wasn’t right. She went to the doctor and an ultrasound revealed what was called an incompetent cervix. This condition is caused when the cervix opens and shortens before the baby's due date, putting the baby at risk of a miscarriage. The next step was an emergency procedure to make sure that Logan wasn't born too early.

Val shared, "The doctors basically told Rob and I that they were gonna send us home to miscarry. Rob and I both looked at the doctor and said ‘we are not going anywhere, whether we have him tomorrow or four months from now, we are staying at the hospital."

She then went on to explain how they put her on bed rest after that. "I wasn't allowed to get up at all and I was like that for 20 days," the mom added. However, all their efforts only bought them a few more weeks before baby Logan was born.

After 20 days Logan was born, and Val went through 32 hours of labor. After he was born, he was quickly rushed to the NICU.

During this time, little Logan had two brain bleeds, two holes in his heart, an inguinal hernia, and a urinary tract infection. But this didn’t stop the little guy from fighting! Luckily he was flown to a special hospital in Oregon that gave him dialysis treatment.

After his UTI treatment was finished, Logan had to have laser eye surgery that was pretty high risk.

Baby Logan spent about 105 days in the hospital, and got stronger and was able to finally be released and go home for Christmas! It was definitely a miracle, especially with how small he was.

What a true Christmas gift to be able to take their little miracle home with them!

Every year on his Birthday, Logan still gets his picture taken with the Superman toy, Logan is now four years old and as happy as ever!

Logan's mom, Val, likes to look back on the pictures to see how far he has come. She said, "The doctor would look at me and say ‘we will see how he does,' and I'd just keep saying, ‘he's a tough guy!' Still to this day, she will message me on Facebook and ask how our little tough guy is doing."

YOU MAY ALSO LIKE: Hauntingly Beautiful Music Fills The Stairwell As Viral Sensation Lauren Paley Belts Out ‘Ave Maria'

His dad Rob went on to express how grateful he is at how well Logan pulled through. “He's just an incredible little boy. A lot of these babies born at 23 weeks have tons of health problems but Logan just didn't, thank God. He's a smart little kid, my little boy, he really is."