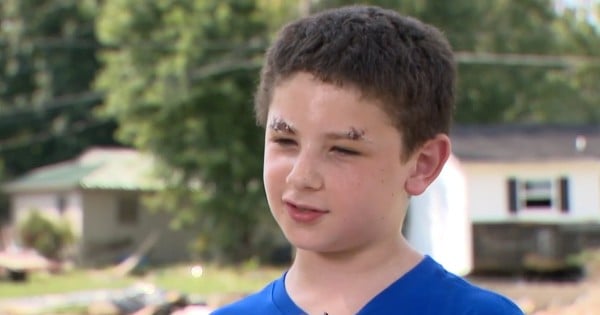 When doctors saw spina bifida in the ultrasound, they gave up on Christal and Bernard Dreyer’s baby. They even suggested terminating the pregnancy. But the couple refused and trusted God, instead. And he sent a miracle!

When doctors revealed Christal and Bernard Dreyer of Johannesburg were expecting twins, it was an answered prayer. But midway through the pregnancy, things took a sharp turn.

RELATED: Mom Plans Funeral While Pregnant For Baby With Virtually No Brain Function & Then Gets A Miracle

At the 20-week visit, the couple planned on finding out their babies’ genders. But the scan revealed something else, too.

"My husband and I went in, the lady continued with the scan, she didn't say much, she confirmed both babies are boys and everything looks good with baby B (Karl). She didn't say much about baby A," Christal recalled.

Excitement turned to concern when doctors spotted spina bifida in the ultrasound.

Doctors Push For Abortion After Spina Bifida In Ultrasound

Doctors and specialists warned Christal and Bernard Dreyer of serious complications likely in the pregnancy. They told the couple their son would be confined to a wheelchair with minimal brain function. And from there, the specialist recommended aborting the unborn baby, outlining all the procedure entailed.

"Doctor explained that they take a needle and insert it into the baby heart, killing it with air injected into his heart, then I will need to carry my dead baby to full term when baby B is born, and then only will they take the terminated baby out," Christal said.

It all sounded so horrible. And the devastated couple came to a decision after receiving a Bible verse from a friend.

"We are facing difficult situations every day and we can take comfort in Jeremiah 29:11 knowing that it is not a promise to immediately rescue us from hardship or suffering, but rather a promise that God has a plan for our lives and regardless of our current situation,” Christal recalled. “He can work through it to prosper us and give us a hope."

Despite the spina bifida in the ultrasound, Christal and Bernard Dryer refused the abortion. Instead, they placed their trust in God’s plan for their baby boy.

The day eventually came when Christal went into labor. And on that day, she gave birth to twin boys — Karl and Deon.

Three days later, doctors whisked Deon off for his first surgery. In it, they removed the MMS sac the spina bifida caused on his back. A few days after that, doctors performed another surgery, placing a shunt to remove the fluid building up in Deon’s brain.

After the surgeries, something somewhat unexpected happened. Despite the spina bifida identified in his ultrasound, Deon Dreyer started getting well. And as the years and treatments passed by, his improvements continued.

"I felt so much joy in those moments," Christal Dreyer said.

By five years old, Deon was the happy, healthy boy doctors said he’d never be. Though Deon still has some medical limitations, it’s nothing like doctors anticipated. This miracle baby has defied all the odds!

Christal Dreyer shares her son’s miraculous story of what happened after doctors found spina bifida in the ultrasound in the hopes of inspiring others who may be facing tough medical decisions.

It’s a powerful reminder that doctors, nurses, and medical staff are wonderful, smart people working hard to help their patients. However, they are limited to the resources of this world. And there are times when science and medicine will fail us.

However, we can’t go wrong by placing our ultimate trust in our Lord, the Great Physician. Through Him, all things are possible no matter what the odds on earth may say!

“You are the God who does wonders. You have made your strength known among the peoples.” Psalm 77:14