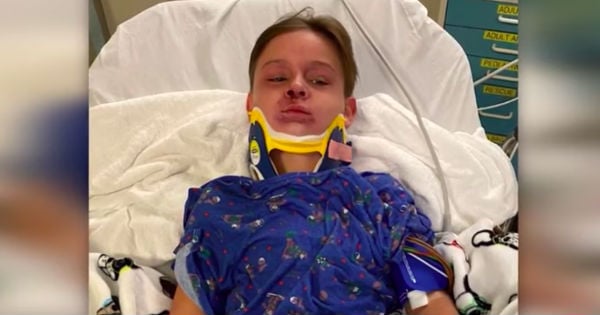 Sometimes God doesn't use guardian angels. Sometimes he uses a real human being for divine intervention. At least that's what He did when one stranger helps a VA state trooper in need.

During a routine traffic stop, Trooper M.W. Deus stopped driver Jimenez Remigios for speeding. But Jimenez wasn't just getting a speeding ticket, he was asked to take a seat on a guardrail because the Trooper smelled marijuana. That's when things went from bad to worse because Jimenez sucker punched the officer.

Talk about being in the right place at the right time–that's when 24-year-old Jake Baber was driving by. "I noticed the officer get blown backwards towards the guardrail, and within seconds a fight broke out between him and the suspect," Jake said.

He immediately stopped his truck and got out to help the Trooper. Another man, Adam, trained in jiu-jitsu stopped to help as well.

"His training allowed him to know, as well as me, to get him (Remigios) to the other side of the guardrail where he couldn't get to the officer, where he wasn't being injured, but he wasn't able to move his arms freely so he wasn't able to cause any more injury to anybody else," Jake said.

"I've trained in jiu-jitsu for eight years, five to six days a week, and have been a teacher for over a year now," Adam said. "When I saw the trooper fighting for his life, it was pure instinct to stop and help."

The situation began to turn deadly when Jimenez began to wrestle for the Troop's gun.

"As I ran up to help, the guy had his hand on the trooper's gun and he yelled ‘he's going for my gun'," Adam said. "I jumped on the guy's back and put him in a rear-naked choke, [a jiu-jitsu move], until we fell back over the guardrail and I could see he didn't have the gun anymore. I then held him until backup arrived."

That’s when Jake Baber was driving by and saw the altercation. He immediately stopped and jumped out to help the trooper. He and another man were able to get Remigios away and hold him until backup arrived. #HenricoNews #NBC12 pic.twitter.com/AvD18JXWgp

"The subject was doing everything he could to get the officer's gun off his belt," Jake added. "That would have been a life-changing moment had that occurred."

State Trooper Saved Thanks To The Help Of Strangers

These two men saved the life of this Trooper. Had they not been there, no doubt the Trooper could've been killed. Seconds later, additional officers arrived on the scene.

"It was like the cavalry was sent out," Jake said. "It was like, where did you guys come from?" For Jake, he's thankful he was there to help, even if it made him late for a job interview.

"That was divine intervention and in my opinion, the Lord placing me there to just to help in the matter of need," he said. What an honor to help protect an officer in his time of need when people like M.W. put their lives on the line for us on a daily basis!

YOU MAY ALSO LIKE: Teen Hero Selflessly Risks His Own Life To Save Mom And 3 Kids Trapped In A Burning Car

Greater love has no one than this: to lay down one’s life for one’s friends. John 15:13