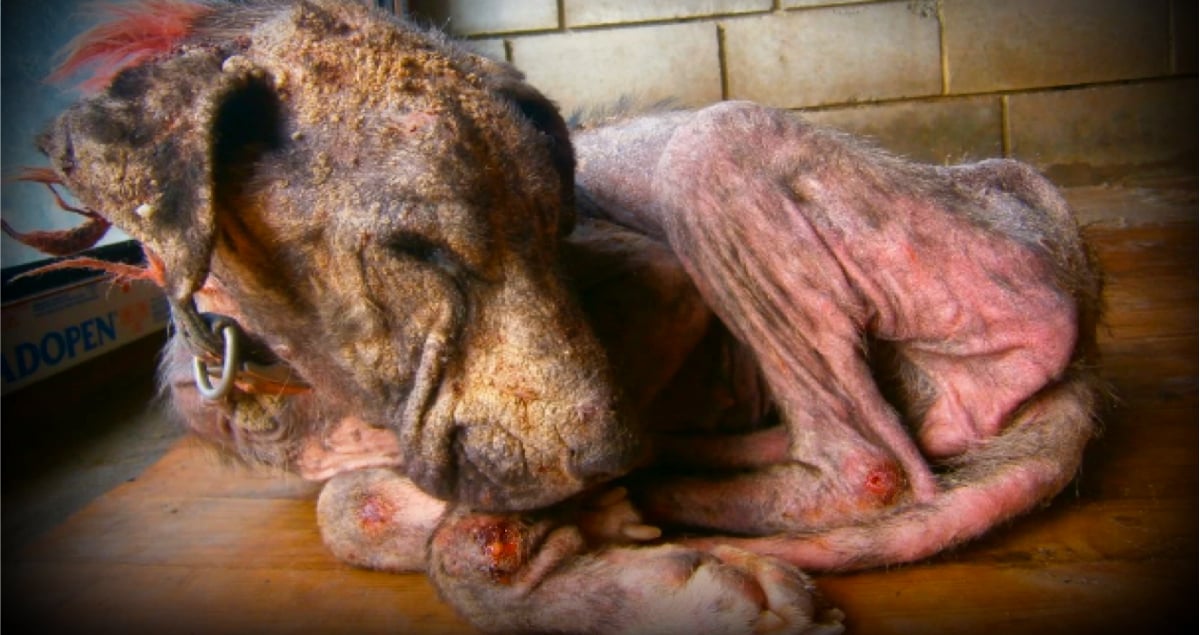 Oomi, The Kitten With Frog-Like Eyes

Meet Oomi. The stray kitten with frog-like eyes turned up at the ASPCA Kitten Nursery in New York City when she was just 4-weeks old. But her huge, bulging eyes were not just an oddity. They were the suspected result of an untreated bacterial infection which nearly took her life! But this miracle kitty wowed everyone with her tenacious will to live!

Even with the rough shape she was in, Oomi was a snuggle bug right from the start.

“I went to meet her and the moment you picked her up, she just wanted to cuddle and be loved,” said Cerena, who worked at the ASPCA.

Working at the ASPCA, Cerena had seen many injured animals before. But there was something special about Oomi.

Once the shelter got her medically stable, Cerena volunteered to foster Oomi. After just her first night, the kitten with frog-like eyes had Cerena’s heart. She turned in her request to adopt Oomi the very next day!

“I always took some extra time to cuddle with her during medication time,” Cerena said. “She just has such a ray of positivity or ‘pawsitivity’ about her. It was hard not to fall in love.” 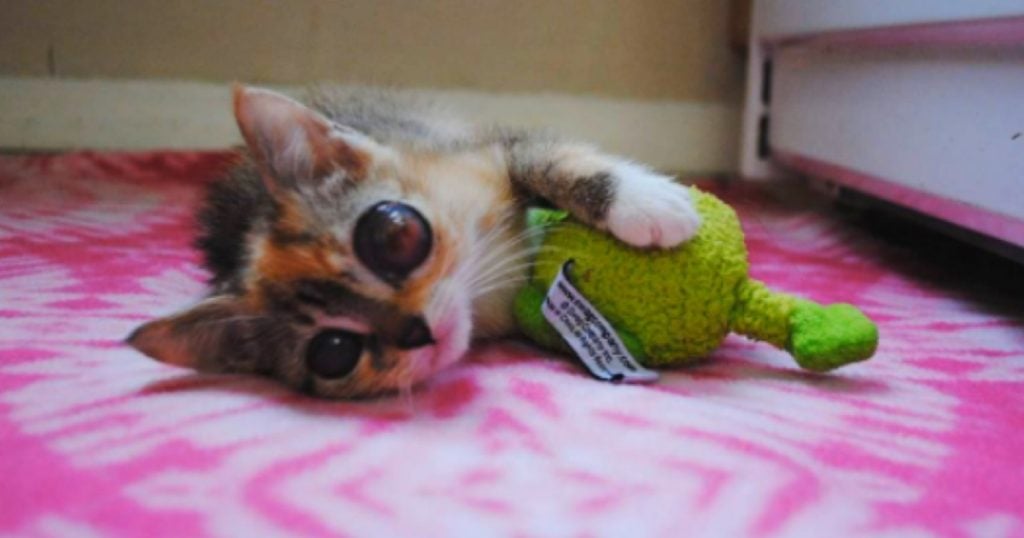 After several evaluations, the vet determined the only way to save Oomi was to remove her eyes completely. But because she was so young, the surgery would need to wait.

RELATED: 2 abandoned kittens found in the trash now live a life of adventure

In the middle of the night, one of Oomi’s eyes ruptured. Terrified, Cerena rushed her to the animal hospital. There was no choice but to perform the operation now, several weeks prior to the scheduled date.

The humans feared for Oomi’s life. But the kitten with frog-like eyes remained calm through the whole ordeal. She knew she’d found humans who loved her, and trusted them to do what was right.

The surgery was a success, and Cerena was there to give the patient the best kind of medicine — cuddles! 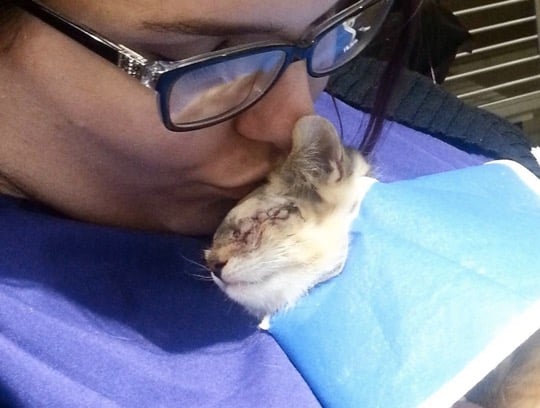 “The moment I held her, she started purring,” Cerena recalled. “I knew she was tough enough to recover!”

Don’t let her sweet-nature fool you. Oomi is one tough warrior! Just a few short days later, she was back on her feet, as playful as ever!

“Her doctor said they’ve never seen a kitten bounce back so quick after surgery! You would never know she’s missing her eyes,” Cerena said.

RELATED: Earless cat that no one wanted returns the favor and saves the woman who adopts him

Now that she has kind humans to dote on her, the loss of her eyes hasn’t bothered Oomi one bit.

“She has a huge personality. . .” Cerena said. “She loves to play but also loves cuddling and just relaxing with us when we are playing games or watching tv. Other than occasionally running into a wall, you would never know she was blind. She runs and tackles her toys like she has 20/20 vision!” 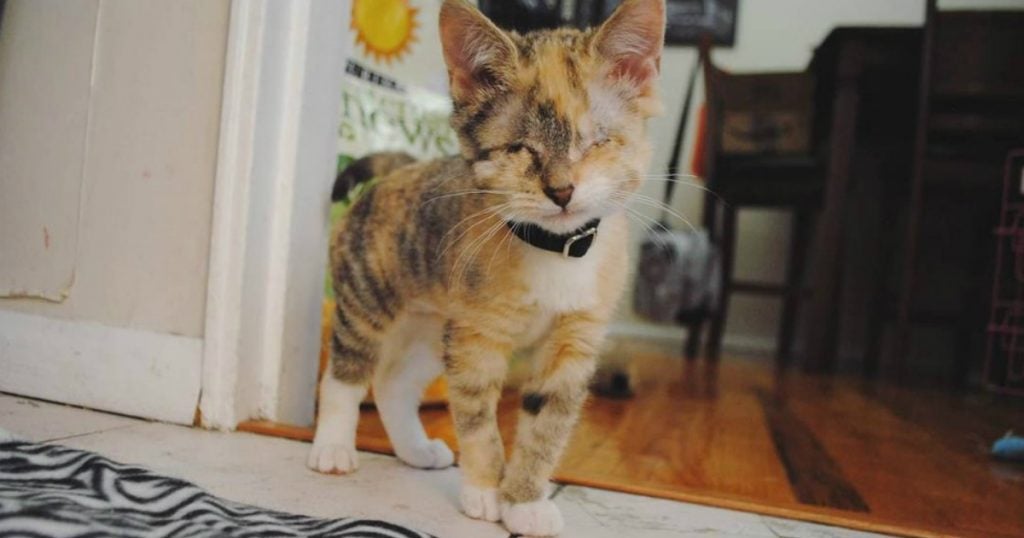 Where She’s Meant To Be

Love is all this miracle kitty ever wanted. And it’s no accident that Cerena met this furry angel when she did.

“I have been dealing with quite a few medical problems along with recovering physically and mentally after a very bad car accident in July. She has kept me going… she’s there to make me laugh! She came into my life exactly when I needed her.”

Be sure to share Oomi’s story of triumph so she can bring a smile to someone else’s face!

This deformed kitten was left for dead, until a 7-year-old angel came to the rescue! 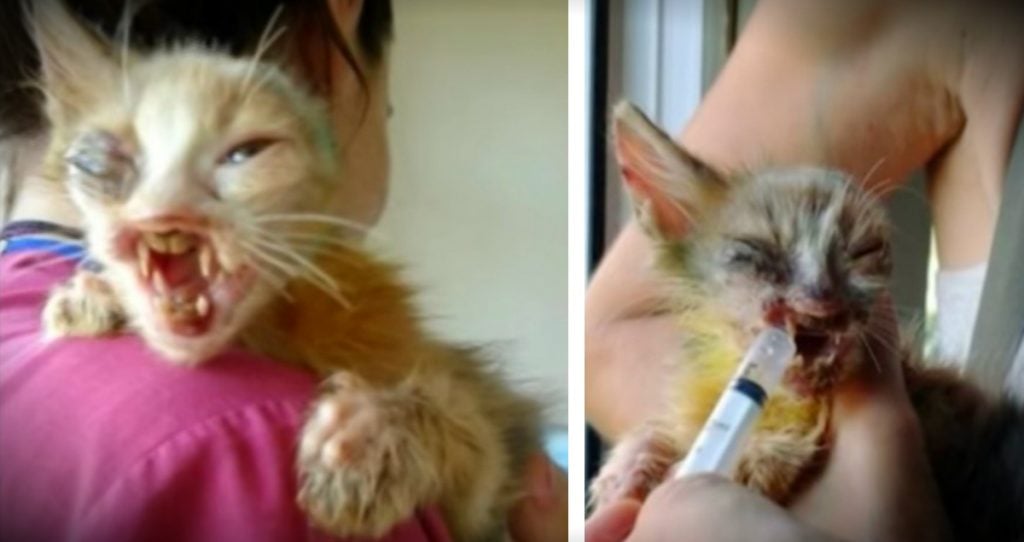