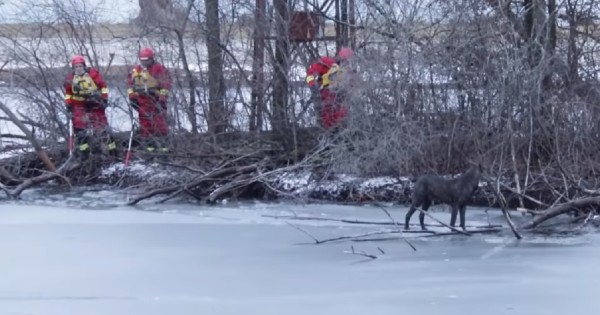 A runner spots a dog stuck in a frozen lake at a park and immediately jumps in to help.

Sometimes people find themselves alone in their hour of need. And we've all heard those instances when our furry friends came to the rescue. In this story, a dog is in life-threatening danger, and a man risked his own life to save the poor pup.

RELATED: 16 Dogs And Cats Are Safe Because Of The Homeless Man Who Ran Into A Burning Building

The Pontefract Park Lake over in Pontefract, United Kingdom, was frozen over. And not just that but the chilled waters and ice almost became a deathtrap for a drowning dog.

Darcy Pell happened to be running with a friend when he spotted the dog stuck in the frozen lake.

Darcy doesn't want to be labeled a hero for his actions though. He commented that he was not a hero, but rather he just saw a dog in need.

Regardless of whether he thinks of himself as a hero, that Saturday afternoon, Darcy rescued a dog's life.

The dog had likely been walking on the frozen lake and fell through cracked ice. Darcy had to smash his way through the ice to get to the animal. After he reached the poor dog, he guided it back to shore. Quickly, he was able to reunite the pet with its owners.

Footage of the rescue was posted online by another person, Paula Town, who also just happened to be passing by at the moment.

She shared the recorded video online and said, "What a hero, this complete stranger rescued this family’s dog when it got into trouble in Pontefract Park.”

Paula noticed the dog struggling to get out of the water before its eventual rescue.

“When we got to the lake, I could see a dog in the water, it was trying to get onto the ice but kept falling back in."

“I felt panic-stricken and scoured the side of the lake for a life buoy but couldn’t find one."

“Luckily that guy came along, he lowered himself into the water and the rest is on the video.”

God definitely had the right person appear at the right time. As it turns out, 31-year-old Darcy has previous experience with cold water swimming!

YOU MAY ALSO LIKE: Truck Driver Dad Spots A Frantic Father On The Side Of The Road And Stops To Help

After the incident Darcy wrote online on the Pontefract Community Page, "Not a hero, just saw a dog in need. Luckily swim in cold/icy water as a hobby and know the risks it can cause. Carried on my run after so no big deal. Was given a jacket by my run buddy. Obviously wouldn’t recommend people doing the same."

“Just glad the dog was happy to carry on its walk after."

WATCH: Runner Spots A Dog Stuck In A Frozen Lake At A Park And Immediately Jumps In To Help