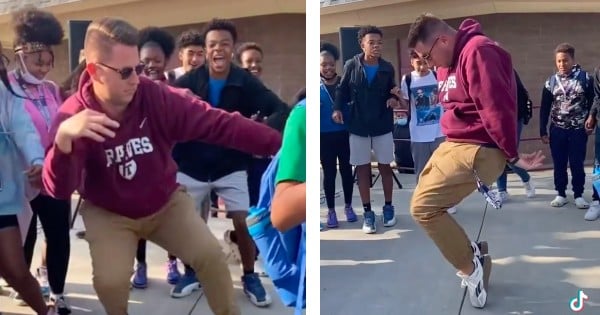 Dwayne Johnson, or “The Rock”, gives away a truck to the man who took him in off the streets. And it’s a touching moment as the wrestler turned actor recalls the impact his friend Bruno had on his life.

Dwayne Johnson rose to fame while wrestling in the WWE as The Rock. After that, he transitioned into a successful acting career, starring in movies and hosting TV shows.

But Dwayne Johnson remembers a time when life wasn’t so easy.

As a teen, The Rock faced essentially found himself homeless. Unable to pay their rent in Hawaii, his mom got evicted. So, she sent her son off to Nashville, Tennessee to live with his dad.

However, when The Rock landed in Nashville, a stranger was there to greet him at the airport in place of his father. The young boy quickly realized he wasn’t actually going to live with his dad.

Finding himself a desperate, homeless teen could have spelled disaster. But The Rock says God “always found a way to put a few people in my path that would change the trajectory of the road I was going down.”

Instead of living with his dad, The Rock we went to stay with one of those God-sends. The man’s name was Bruno Lauer and he helped The Rock out even though they’d never met.

“He took this punk kid in and we became lifelong friends,” Dwayne Johnson recalls.

Bruno gave The Rock his last $40 to help him buy his first car. When The Rock started his career in the WWE, long before his persona became a household name, Bruno again gave him a place to stay.

So, years later and after all his success, The Rock gave away a truck as a special way to thank his friend “Downtown Bruno” for all of his support.

Dwayne Johnson invited Bruno onto the set of his comedy TV show about his life, Young Rock.

The Rock reminisces with Bruno about some of the things they experienced together. And while there are plenty of laughs over the “crazy times”, The Rock also expresses his sincere gratitude for all Bruno did.

“Your kindness and heart helped change my life's trajectory,” The Rock says of Bruno’s positive influence.

Then, Dwayne throws a curveball.

The Rock Gives Away A Truck

The Rock gives away a brand new Ford truck to his friend, leaving Bruno Lauer absolutely stunned and in tears.

“Nobody’s ever done anything like this for me before,” Bruno says, overcome with emotion.

The Rock explains how he’s already taken care of the tags and will have the new vehicle shipped to Bruno’s home in Walls, Mississippi.

“I love you man. Not ’cause of this,” Bruno says, referencing the truck the Rock gave away, “‘Cause of who you are… Thank you, Lord Jesus, for putting you in my life.”

The Rock shared the big surprise on his Instagram account. And you can watch the heartwarming moment below (just be warned there is one instance where profanity is used).

WATCH: The Rock Gives Away A Truck To Say ‘Thank You’