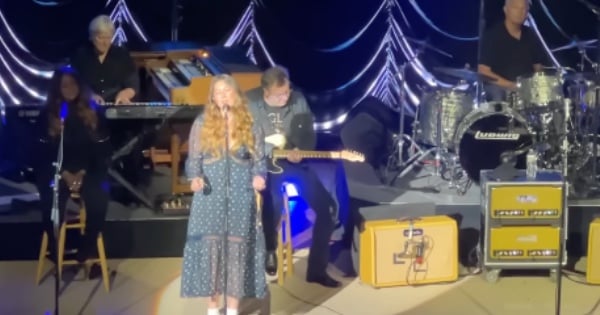 After Amy Grant’s Accident, Her Daughter Sings ‘When My Momma Prays’ As A Touching Tribute
Read Article »

The West End Gospel Choir got the opportunity to sing the song ‘Bring It On Home To Me’ with none other than Michael Buble. Talk about the surprise of a lifetime!

London's West End Gospel's choirmaster, Nathaniel Morrison, and the film crew planned quite a treat for the group's singers and their special guest, Michael Buble. The video's subtitles bring viewers up to speed.

Nathaniel had made secret arrangements for Mr. Buble to visit the group on Day 1 of Michael’s promotional tour for his new album titled Higher. Meanwhile, the choir practiced Michael's new song, thinking they were merely making clips for the singer’s social media campaign.

Watch what happens as the gospel group and the Canadian crooner both get big, delightful surprises!

Before entering, Michael Buble listens excitedly to the singing coming from inside the practice space. He shares that he loves Gospel, and he "loves human beings coming together and singing." He enters as the choir sings "Jesus, What a Wonder You Are," which very quickly turns to laughter, clapping, and screams from the dozen choir members!

The group is all smiles. And so is Michael Buble. He seems super humble and pleased to be in their company. And the fun part for him hasn't even started!

Choirmaster Nathaniel tells Michael that the choir is going to sing something that he might know. He invites Michael to join in as the spirit directs. It takes only the utterance of the word "if" for Michael to recognize the song ‘Bring It On Home To Me’. Nathaniel, who clearly has awesome chops of his own, sings through the first verse. Meanwhile, Michael Buble joyfully watches with watery eyes and a touched soul!

The Song ‘Bring It On Home To Me’

The legendary soul singer Sam Cooke first made the song ‘Bring It On Home To Me’ famous in 1962. It tells the story of a man who is desperate for his love to return home. Michael Buble adds his cover to a list of other greats who have recorded the classic love song, including Rod Stewart, John Lennon, Mickey Gilley, and others.

As the second verse begins, Michael begins singing, and Nathaniel adds background vocals. At first, one, then two, and then the twelve members of the choir add in all the good stuff that they've been working on, completely without knowing they'd actually get to perform it with Michael Buble up close and in person! What a thrill!

And, look out now! These musicians are having so much fun doing their thing! And, their thing is outstanding, guaranteed to give listeners goosebumps!

After a big finish, Mr. Buble gives hugs to each of the choir members and to Nathaniel. He is obviously moved by the moment, saying, "When I recorded this song, it was the greatest thing I recorded in my life. I've been driving people crazy. I kept saying … ‘How am I ever going to make a moment of this and let people see it, how beautiful this is?' And this is the moment. You guys gave me the moment."

Thanks for sharing the moment with all of us, West End Gospel, Nathaniel Morris, and Michael Buble!

"For long ago, in the days of David and Asaph, there had been directors for the musicians and for the songs of praise and thanksgiving to God." Nehemiah 12:46

WATCH: Michael Buble Sings The Song ‘Bring It On Home To Me’ With Gospel Choir

LISTEN: Do You Know What YHWH Means? | Shaquille O'Neal Shows Unthinkable Kindness to Family with 9 Kids