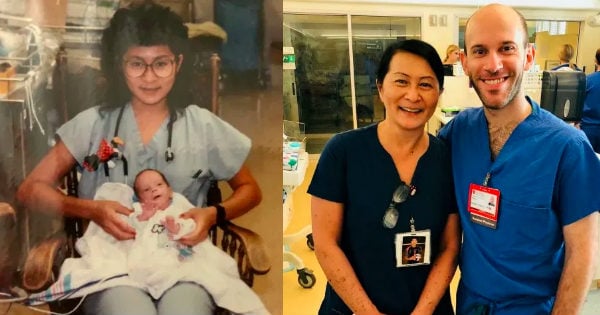 A trucker on the road named Mike Kreisel shares the heartwarming short story of what happened after he stopped for a mom and her kids who were waving him down.

Work for a trucker on the road was hard enough before the coronavirus pandemic hit. But as people started wiping out the shelves at grocery stores, the job became even tougher.

RELATED: Stranger Spots Walmart Truck Driver And Asks If He Can Pray For Him

And it’s not just the overwhelming push to get products delivered faster. Finding meals has become its own challenge, with restaurants closing their doors. Drive-throughs aren’t really an option for the huge trucks.

Being a trucker on the road is often a thankless job, even in the best of times. But truck driver Mike Kreisel had an encounter that made his day and left a huge lump in his throat!

Mike was on his way back from St. Louis when he pulled into a rest stop for a break. There, he noticed a pickup truck in the parking lot with two girls, around 7 or 8 years of age, holding up to handmade signs in the back.

“I couldn't read the writing but I could see all the glitter and the pictures,” Mike Kreisel recalled. “And I can make out something about truckers. They were jumping around and waving them excitingly at every truck that passed by on the interstate.”

When it came time for this trucker to get back on the road, he hopped into his semi and headed for the exit to the highway. But that’s when he spotted the “mom” running toward him.

An Act Of Kindness For A Trucker On The Road

She was waving her hands for Mike to stop. So he did and rolled down his window.

The woman handed a bag to the trucker on the road.

“We wanted to thank you for what you're doing,” she said to Mike. “You and all the truckers working hard to keep our supply lines open. Here's just a little goodie bag we put together to show our appreciation. Be safe and thank you again!"

It’s been a tough time for all of us. And the unexpected act of kindness hit Mike hard, leaving a “lump in his throat” as he headed back towards the interstate. especially when he noticed the dad, with a US Army stocking cap, putting more bags together for the girls to hand out.

“Couldn't be prouder or more touched than right now,” Mike Kreisel wrote on Facebook. “We're going to make it through this…with love, caring, and that unbreakable American spirit.”

What a beautiful reminder of how many unsung heroes are out there working so hard to take care of us during these uncertain times.

YOU MAY ALSO LIKE: Security Camera Catches FedEx Driver's Act Of Kindness For Widow

So, whether it’s a trucker on the road, a first responder, medical staff, a grocery or pharmacy worker — let’s look for ways we can say thank you!